Legislation would not require married transgender individuals to divorce 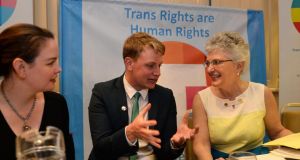 Senator Katherine Zappone (right) with from left; Dr Tanya Ní Mhuirthaile and Broden Glambrone, Transgender Equality Network Ireland, at the launch of a Bill to legislate for the Legal Recognition of Gender in Ireland. Photographer: Dara Mac Dónaill/The Irish Times

A Bill to allow transgender people be issued with birth certificates that reflect their preferred gender was launched in Dublin this afternoon by Senator Katherine Zappone.

The Legal Recognition of Gender Bill , co-sponsored by senators Gillian Van Turnhout and Fiach MacConghail, provides for the introduction of a Gender Recognition Register which would collate self-declarations of gender from transgender individuals. The information contained on this register would then be used when new birth certificates are issued.

The proposed legislation would not require a married transgender individual to be divorced before they could make the self-declaration. And it would be applicable to under 18s with the support of their legal guardians.

Transgender people face difficulties in Ireland when carrying out everyday tasks such as applying for a driver’s licence or buying a mobile phone because their birth certificates do not reflect their preferred gender.

A High Court judgment in 2007 found the Government’s failure to give legal recognition to transgender people was in breach of the European Convention on Human Rights. And a report in 2011 from the Gender Recognition Advisory Group recommended the introduction of legislation. However, transgender groups raised concerns about the criteria it suggested.

These included that individuals in existing valid marriages or civil partnerships would be excluded from the scheme, that the minimum age would be 18 and that certain medical criteria would have to be met, such as a formal diagnosis of Gender Identity Disorder or evidence of gender reassignment surgery.

Ireland is the only country in the European Union that does not legally recognise transgender individuals in their preferred gender.

Ms Zappone said she was painfully aware of the incredible injustice and discrimination that the transgender community in Ireland has had to endure.

“This Bill seeks to ensure the dignity of transgender people and protect their rights to self-determine their identity,” she said.

The government advisory group requirement that married transgender people should divorce as a precondition to legal recognition was a “gross interference with the private and family lives of the people concerned”, she said.

Colm O’Gorman of Amnesty, said it would be unacceptable for the Government to introduce legislation requiring individuals “to go through forced sterilisation or forced divorce” and place “barbaric requirements on people”.

Sam Blanckensee, a 19-year-old transgender student who changed his name after completing his Leaving Certificate, spoke of the difficulties he has encountered and said he did not know what name would be on his degree when he receives it from university.