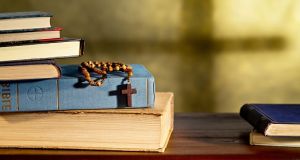 He said he did not believe it was right that children should be discriminated against on the basis of religion or lack of it when seeking access to State- funded schools.

“No I don’t. I do not. These schools are provided by the State. They are paid for by the State. I don’t believe it is appropriate that a child should have to be baptised to go to school.

“However, the Constitution has provision for religious institutions to protect their ethos . . . The only way to get forward movement on this might be in the next government; that in the citizens’ convention, this issue could be considered and see what is the best way forward.”

Asked whether he thought there needed to be a referendum, he said: “It would appear to. That’s the advice we have.”

He said he would not like to pre-empt the outcome of a debate on the issue at a citizens’ convention.

Article 44.2.5 says: “Every religious denomination shall have the right to manage its own affairs, own, acquire and administer property, movable and immovable, and maintain institutions for religious or charitable purposes.”

Mr Reilly was speaking to reporters just after a day-long examination before the United Nations Committee on the Rights of the Child in Geneva, where he led a delegation of 13 senior civil servants from across Government.

This was the first time Ireland had been examined on its compliance with the Convention on the Rights of the Child since 2006.

The issue of non-Christian children’s rights in accessing State-funded schools was repeatedly raised.

Committee chair Gehad Madi from Egypt asked about how the religious patronage of more than 90 per cent of schools impacted on non-Christian children. Acknowledging the divestment process, Mr Reilly said there was a “problem” with implementation.

Asked by Ireland rapporteur, Norwegian Kirsten Sandberg, if there was any intention of amending section 7.3 of the Equal Status Act which permits schools to discriminate to protect their religious ethos, Department of Education official Caitríona O’Brien said: “That’s the intention, yes”.

However, Mr Reilly said afterwards such a move would be an “all of Government decision”.

He told the committee the Government was committed to a “more pluralist system” of education, adding it was a matter of concern that current policy was “lagging behind” the reality on the ground.

Progress was best made through consultation and dialogue.The committee will publish its concluding observations on February 4th.