Review of practices at Oberstown detention centre under way 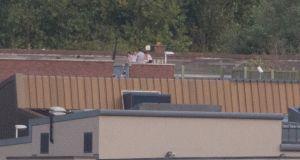 Some residents at the Oberstown Detention Campus, Dublin (above) climbed up onto the roof of one of the buildings. During a stoppage by staff last month, children were confined to their bedrooms but some escaped and a major fire broke out. File photograph: Gareth Chaney Collins

Two international experts are to conduct a review of operations at the Oberstown children detention centre in north Dublin.

Terms of reference of the review, which begins immediately, were signed off on by the Oberstown board last Wednesday.

The review comes after a dispute between management and staff over safety measures at the centre.

Some 100 incidents, almost half of which were described as critical, were recorded at Oberstown last year. During a stoppage by staff last month, children were confined to their bedrooms but some escaped and a major fire broke out.

Welcoming the review, Minister for Children and Youth Affairs Katherine Zappone acknowledged that “the Oberstown campus has experienced significant change in recent years with the merger of three schools, the completion of a € 56 million modern facility and a substantial staffing programme.

“A number of serious incidents and industrial action by staff at the campus have highlighted the need to reflect on the progress achieved and to identify and address any obstacles to the necessary future reforms.”

For such reasons Ms Zappone believed the review was “timely” in ensuring “the safety of all at Oberstown and at the same time end Ireland’s abysmal record of placing children in adult prisons”.

Prof Ursula Kilkelly, chair of the board at Oberstown, said the review was intended “to ensure that Oberstown fulfils its potential to be a world-class centre of excellence for the detention of children under 18 years sentenced or remanded by the courts”.

The board believed it now had an opportunity “not just to set the future course for Oberstown but to significantly change youth justice in Ireland for ever”, she said.

Prof Goldson is Charles Booth chair of Social Science at the School of Law and Social Justice, University of Liverpool, and has provided expert evidence to such as the UN Secretary General’s Study on Violence Against Children; the UK All-Party Parliamentary Group on Children; and the Northern Ireland Assembly Justice Committee.

Prof Hardwick is chair of the parole board in the UK and part-time Professor of Criminal Justice at the School of Law, Royal Holloway, University of London. He was chief inspector of prisons for England and Wales from 2010 to 2016.