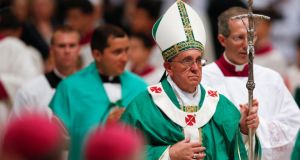 A negative report by the Committee on the Rights of the Child would be a blow to the Church whose leader, Pope Francis, is striving to put a number of scandals behind him since succeeding Benedict XVI. Photograph: Tony Gentile/Reuters

A United Nations human rights panel has posed a list of tough questions to the Vatican about child abuse by Catholic priests, a potential embarrassment for Pope Francis a few months into his papacy.

The UN Committee on the Rights of the Child (CRC) asked for “detailed information on all cases of child sexual abuse committed by members of the clergy, brothers or nuns” since the Holy See last reported to it some 15 years ago, and set November 1st as a deadline for a reply.

The request was included in a “list of issues”, posted on the CRC’s website, to be taken up when the Vatican appears before it next January to report on the Church’s performance under the 1990 UN Convention on the Rights of the Child.

It will be the first time the Holy See has been publicly questioned by an international panel over the child abuse scandal which severely damaged the standing of the Roman Catholic Church in many countries around the world.

The CRC has no enforcement powers, but a negative report after the hearing would be a blow to the Church whose leader, Pope Francis, is striving to put a number of scandals behind him since succeeding Benedict XVI who resigned in February.

By issuing its questions, the Geneva-based CRC brushed aside a Vatican warning that it might pull out of the Convention on the Rights of the Child if pushed too hard on the issue.

In a report of its own in late 2011, posted on the UN website last October, the Holy See reminded the CRC of reservations on legal jurisdiction and other issues it made when it signed the global pact.

It said any new “interpretation” would give it grounds “for terminating or withdrawing” from the treaty.

In its request for information, the CRC asked how the Vatican was ensuring that abuser priests have no more contact with children and what instructions it has issued to ensure that cases known to the Church are reported to the police.

In several countries, including the United States and Ireland, the Church has been accused of simply moving suspect priests from one diocese to another, and of handling cases secretly.

The committee also asked if the Church had investigated the Magdalene Laundries run by nuns in Ireland over several decades until they were closed in 1996, where former female inmates say they were treated as slaves.

There was no immediate comment from the Vatican today.

Keith Porteous Wood, executive director of Britain’s National Secular Society who gave evidence to the committee in June, said he hoped for a new line from Pope Francis.

“He has expressed the Catholic Church’s determination to act decisively against pedophiles,” said Mr Wood. “This gives room for optimism that these issues will at last be tackled. His papacy will be judged on his success in doing so.”