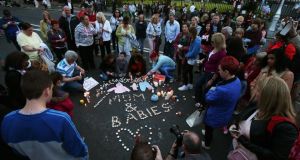 ‘The home in Tuam closed before I was born.’ Above, people leave candles and mementoes during a march and vigil last week in memory of the Tuam babies. Photograph: Brian Lawless/PA

Even though I am currently in Indianapolis on sabbatical, even at a distance of 4,000 miles it’s impossible not to feel people’s shock at reports of what may be a mass grave of children and infants in the grounds of a home run by nuns in Tuam, Co Galway, up to the 1960s.

The story has reverberated around the world, including to Indiana. Hopefully, the investigations that are promised will proceed quickly, because the full truth needs to emerge, about this and other similar homes.

When a story like this breaks, it’s like deja vu all over again for the Irish church. One had hoped that after all the inquiries of recent years, the church’s dirty linen had been exposed, and it could begin the process of recovery.

Then another storm erupts, and it’s as if we’re plunged back to the beginning – except it’s worse now. The cumulative effect of all the scandals means that each new one has a more devastating impact than the one that went before.

Anger is the predominant emotion. People are angry at the church. They wonder how these things could have been allowed to happen; how such a culture could develop in the church and nobody said stop.

Church people are also angry that this story has been spun in a sensationalist way that presents the church in the worst possible light.

There is also the gleeful anger of those presented with another opportunity to crucify the church. They are genuinely outraged by the Tuam revelations, but they are thrilled that the church is on the defensive again. Comments on social media reveal the depth of their antipathy.

No one doubts that a growing anti-Catholic element exists in Irish society. But the church has provided its enemies with weapons of mass destruction. It has no one to blame but itself.

For church people like myself, there is also a tremendous feeling of shame.

It’s the shame of being an official representative of the institution caught up in yet another storm. The shame of seeing church leaders once more having to express regret; of outside agencies once again stepping in to uncover truths about the church’s past.

There is also self-pity. The home in Tuam closed before I was born. The scandals of the last two decades had nothing to do with me. The abuse and cover-up were not my fault. The culture of moral rectitude and dark secrets that facilitated such behaviour can’t be blamed on anything I did or said.

Tempting though it is to put on my Luis Suarez-autographed Liverpool jersey and walk away, I still stick with the church. I stick with it because when it comes to safeguarding children and the vulnerable, the church, like the rest of society, is different from 30 years ago.

Though some critics will never believe it, and no institution can ever be perfect, the church is a far safer environment now for the vulnerable than ever before.

A poor church for the poor is what Pope Francis advocates. A church not interested in power or privilege, but that is out on the streets, in the margins, where its founder was to be found.

I stick with it because of so many in the church who show me the true meaning of Christianity. Clergy who are there for people in their despair, whose doors are open all hours. Religious who live in difficult housing estates, present to those in most need. Advocates, like Peter McVerry, who point to the importance of economic fairness. Groups like the St Vincent de Paul who demonstrate practical Christianity at its best.

I stick with it because of so many ordinary Catholics who have stuck with it despite all the times the church has let them down. Like those in parishes in Leixlip and Rathgar, where I have served.

They have been disappointed in the church enough times, but still they stay, because they do not confuse belief in God with faith in the church, and they know that every institution is made up of broken people, and they find nourishment and support in gathering as part of a believing community to worship and pray.

These are the people who keep me going when I begin to waver, as I have this past while. Fr Gerard Moloney is a Redemptorist priest and editor of Reality magazine