Tens of thousands participate in Twelfth of July celebrations 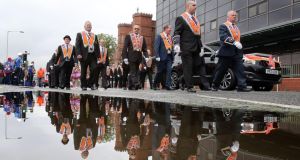 Orange Order marchers are reflected in a puddle during parade in Belfast on Monday marking the Twelfth of July celebrations which commemorate the victory of Protestant King William of Orange over Catholic King James II at the Battle of the Boyne in 1690. Photograph: Paul Faith/AFP/Getty Images. 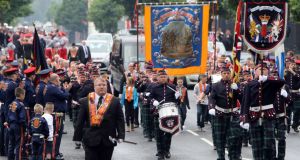 The Twelfth of July parades are an unrivalled show of community solidarity, the grand master of the Orange Order Edward Stevenson has told Orangemen and women in Co Armagh.

Mr Stevenson spoke at the flagship Twelfth parade in Bessbrook in south Armagh on Monday on a day when thousands of Orangemen and women marched behind hundreds of bands. They were watched by tens of thousands of spectators at 19 parade locations across Northern Ireland.

In Belfast an estimated 10,000 members of the Orange Order paraded behind 70 bands to the demonstration field at Barnett Demesne in south Belfast. The parades celebrate the 325th anniversary of King William defeating King James at the Battle of the Boyne in 1690.

In all the Orange Order staged 18 parades in towns such as Kesh in Co Fermanagh, Coleraine in Co Derry, Hollywood in Co Down, Ballymena in Co Antrim and Benburb in Co Tyrone. The Independent Orange Order also held a parade in Ballymoney, Co Antrim.

While there were three security flashpoints in Belfast - in the east of the city, close to the centre and in the north - the vast majority of parades took place without serious incident.

As Orange Order members paraded the same three resolutions were read out by senior figures committing themselves to the Protestant faith, the British monarchy and the union of Northern Ireland and Britain.

There were also numerous calls for the disbandment of the Parades Commission which decides on contentious parades.

At Bessbrook the grand master Mr Stevenson said there was a “certain irony” that a large-scale Orange parade could take place peacefully in the “heart of south Armagh” while in places such as Drumcree near Portadown and in Belfast Orangemen were restricted from parading.

“Unfortunately, republican agitation and sectarianism against our cultural heritage is unrelenting,” he said.

Mr Stevenson referred to the recent opening of two new Orange museums at Loughgall, Co Antrim and in Belfast.

“Orangeism has a place right in the history of the British Isles and elsewhere; and we are delighted that we are now able to tell the story of our tradition in two modern interpretive centres and museums,” he said.

Mr Stevenson said the Twelfth was “now widely recognised as one of the largest festivals in Europe…an unrivalled show of community solidarity, as well as a fantastic spectacle of colour, fellowship and music”.

Drew Nelson, the grand secretary of the order, said there were many who would like to see the institution “confined to the dustbin of history”.

He said the order was built on two founding principles, the Protestant faith and commitment to British heritage.

“We don’t seek to intimidate or threaten or annoy those who do not participate in our celebrations. But it is important to us that we are allowed to freely exhibit the emblems, images and symbols of our organisation and what it stands for,” Mr Nelson said at the Laurencetown demonstration in Co Down.

“I am absolutely confident that our role in society will increase in the foreseeable future. We will not be confined to the dustbin of history,” he added.

In Bushmills, Co Antrim the former deputy grand master of the order, the Rev Alistair Smyth said that King William “fought for civil and religious liberty”.

Such principles were under threat, he added. “Even in our own province and across the United Kingdom we see this growing intolerance strutting under the banner of equal rights,” said Mr Smyth.

“Consider the legal action taken against businesses, like the much-publicised Ashers Bakery, or Christian owners of bed and breakfast establishments who decline to allow gay people to book rooms in their premises,” he added.

Ian Wilson, the former Scottish grand master told Orangemen in Ballymena, Co Antrim, that unionists should celebrate Scotland voting to remain within the UK. He described the Scottish National Party’s appeal to voters as “hogwash wrapped up in a saltire”.

“They offered no credible programme, demanded fiscal powers that would be suicidal if granted and had a record in government at Holyrood that was totally abysmal. It’s shaming that a million and half Scots fell for it,” added Mr Wilson.

“Unionists should not dwell on the SNP’s election windfall, but concentrate instead on the trouncing they received in last September’s referendum on Scottish independence. It was a victory that the Scottish Orange Order contributed to hugely,” he said.