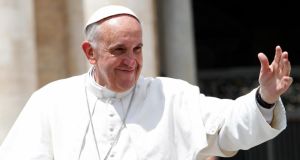 Pope Francis: among those he married were people who had children out of wedlock, others who had divorced and others who had their marriages annulled

Pope Francis twice indicated over the weekend that he wants the Catholic Church to seriously reassess its key teachings with regard to marriage.

A Synod, the closest thing the Catholic Church ever gets to a parliament, is due to meet in two weeks to discuss a range of “family” related matters including contraception, same sex marriage and marriage annulment.

Throwing his own, very heavy hat into the ring, the pope yesterday said:

“Faced with so many pastoral requirements, faced with the requests of men and women, we run the risk of becoming afraid and of turning in on ourselves in a fearful and defensive manner . . .

“This fear leads to the temptation to be self-satisfied and to clericalism, to codify the faith in rules and instructions just as was done by the Pharisees, the scribes and the doctors of law in Jesus’s time . . .

“It is not the pope’s job to offer a full and detailed assessment of contemporary reality but he invites all the church to grasp the signs of the times . . .”

The falling out relates particularly to the indissolubility of (church) marriage and, by extension, to the ban on divorcees and those who are remarried receiving the sacrament of communion.

Days before the Synod, which begins on October 5th, five senior church figures, including Australian cardinal George Pell and German cardinal Gerhard Muller, prefect of the Congregation for the Doctrine of the Faith, will launch a book entitled Remaining With Christ’s Truth.

Among other things, the book suggests that certain tenets of Catholic teaching are not up for grabs. In particular, it lays heavy emphasis on Christ’s teaching when he says:

To some extent, this book is seen as a reply to German cardinal Walter Kasper’s comments last February when, with the full approval of the pope, he appeared to call for some way in which the divorced and remarried might be permitted to receive communion.

Critically, the pope appeared to add further fuel to this pre-Synod debate yesterday when he announced the creation of a “special commission for the study of the reform of the matrimonial processes in canon law”.

His words this weekend follow hard on the heels of an interview given to daily Il Mattino by Cardinal Kasper who said:

“They [the cardinals opposed to change] want ideological warfare at the next Synod. The doctrine of the church is open but they want a crystalline truth. When they attack me, their real target is not me but rather the pope himself . . .”

a significant gesture last weekend when he married some 20 couples in the Basilica of St Peter’s. Among those married by the pope were people who had had children out of wedlock, others who had divorced and others again who had had their marriages annulled.