About 50,000 on hand as pontiff prays for peace in Syria, Iraq, and other strife torn zones 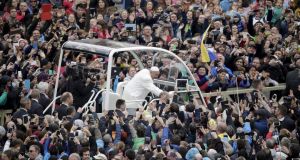 Pope Francis waves at the end of the Easter mass in St Peter’s Square at the Vatican. Photograph: Max Rossi/Reuters. 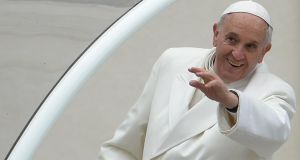 Pope Francis greets the crowd from the popemobile after the Easter Mass in the Vatican. Photograph: Filippo Monteforte/AFP/Getty Images.

Pope Francis made an appeal for peace in Syria, Iraq, the Holy Land and other strife torn zones in his traditional Easter blessing.

In his “Urbi et Orbi” (to the city and the world) message in a rainsoaked St Peter’s Square, he prayed for an end to the persecution of Christians and the students massacred by Islamist militants at Garissa University in Kenya.

Speaking after he had celebrated the Easter resurrection mass in front of a 50,000 strong crowd of faithful who had braved the heavy rain, the pope Francis began his address by first of all wishing everyone a “Buona Pasqua” (Happy Easter).

“We ask for peace, above all, for Syria and Iraq, that the roar of arms may cease and that peaceful relations may be restored among the various groups that make up those beloved countries,” he said.

“May the international community not stand by before the immense humanitarian tragedy unfolding in these countries and the drama of the numerous refugees.

“We pray for peace for all the peoples of the Holy Land. May the culture of encounter grow between Israelis and Palestinians and the peace process be resumed...”

The 78-year-old Argentine pope, celebrating the third Easter of his pontificate, spoke from the central balcony of St Peter’s Basilica after saying a Mass below for tens of thousands of people wearing plastic ponchos and holding umbrellas against the driving rain.

He also “implored peace” for Libya, Yemen, Nigeria, South Sudan and the Democratic Republic of Congo as well as for Ukraine.

He made reference to two events of the past week when praising the nuclear framework agreement signed with Iran by the United States, United Kingdom, France, Russia, China and Germany last Thursday.

He also made reference to the killings on Thursday of 148 students at Garissa University College in Kenya, saying:

The pope also prayed for those who were “victims of drug dealers” and he asked for “peace for this world subjected to arms dealers, people who make money out of the blood of men and women...”

Francis concluded by expressing the hope that “the marginalised, the poor, the imprisoned, and the migrants who are so often maltreated and discarded” as well as the sick and the suffering might hear the consoling voice of the Lord Jesus saying:

“Peace to you! Fear not for I am risen and I shall always be with you.”