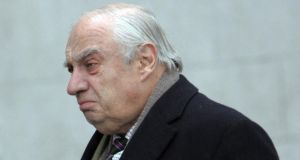 Former attorney general Peter Sutherland has been elected president of the International Catholic Migration Commission. His election has been approved by the Vatican.

The commission is an international non-governmental organisation, focused on the protection of uprooted people, regardless of faith, race, ethnicity or nationality.

Serving since 2006 as the UN Secretary General’s special representative for international migration, Mr Sutherland has worked with governments and other stakeholders worldwide to spearhead and guide the Global Forum on Migration and Development.

At a meeting with commission staff in Geneva last week he presented his views on the role the organisation should play in the years ahead.

On his elevation he said he was “enormously proud to be the president of this globally respected organisation”. He emphasised his rejection of nationalism and spoke of his commitment to EU integration. “So many of the policy and political responses right now are utterly disgraceful, and we need to establish a clear road map for the future to change the narrative,” he said.

He spoke of the need for better responsibility-sharing, particularly among EU countries, including the need for solidarity towards countries most affected by refugee crises.

Noting that the commission has a role to play in engaging the Catholic Church more proactively in migration issues, he noted the concern Pope Francis constantly expresses for migrants as a positive sign that the Church will be more closely involved in global migration debates in the future.

Together with the UN High Commissioner for Refugees, it runs a joint resettlement deployment scheme. It deploys more than 140 resettlement specialists and child protection experts annually to UNHCR’s field offices worldwide.

Since 2011, the commission has co-ordinated civil society activities of the Global Forum for Migration and Development which involves more than 700 NGOs, migrant and diaspora associations, faith-based, labour and development organisations, academics, and the private sector from around the world.