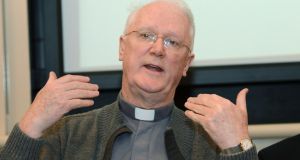 Fr Brendan Hoban of the Association of Catholic Priests. “Haranguing them into voting No in the referendum, regardless of the substance of the arguments . . . will have the effect of driving more and more of them out of the church. Photograph: Alan Betson/The Irish Times

Gay people remain fair game among those “issues” deemed worthy of struggles with conscience by our churches. Other faiths, too. So Anglicans worldwide tear themselves asunder, in conscience, over gay clergy, while the Church of Ireland sits on the fence over the marriage equality referendum as its house of bishops cannot agree to do otherwise.

That church is divided on gay clergy to the point of farce. At a contentious general synod debate on the issue in 2012, a woman priest from a rural parish wondered how her congregation would cope with seeing a gay minister. She seemed to forget that not so long ago, similar concerns were expressed about congregations being faced with a woman priest.

Where the Catholic Church is concerned, there is significant disquiet among clergy at parish level about how its opposition to the referendum will affect gay people in their congregations – and on the church itself.

In his weekly Western People column last month, Fr Brendan Hoban, a parish priest at Moygownagh, Co Mayo, and a founder of the Association of Catholic Priests, was clear.

will have the effect of driving more and more of them out of the church.

“Individually or collectively has that triumvirate – the bishops, Iona and the hardline fundamentalists – any idea of the damage they’re doing to the church they profess to serve with such devotion? A positive result for ‘Catholic’ forces (the defeat of the referendum) could do huge damage to the Irish Catholic Church.”

In this newspaper on Tuesday, Augustinian priest Fr Iggy O’Donovan argued for a Yes vote in the referendum on the grounds that “respect for the freedom of others who differ from us is part and parcel of the faith we profess”.

Also yesterday, in Maynooth, archbishops Eamon Martin and Diarmuid Martin outlined the bishops’ opposition to a Yes vote and called on people to reflect on the consequences of such a vote.

That is their right, but, while few would doubt either man’s compassion in addressing the distress of gay people, it is difficult not to wonder when, finally, that compassion will be free to embrace fully a group so consistently beleaguered and marginalised by the churches.