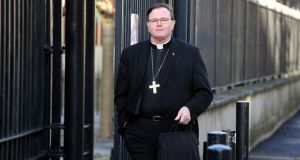 Independent Bishop Pat Buckley: Arrived in Istanbul on Monday night “on a private holiday with a few friends” but “people had told me not to come”. Photograph: PA

Independent Bishop Pat Buckley had a narrow escape in Istanbul on Tuesday morning when he and the small group he was with posed for photographs at the Egyptian obelisk near the city’s Blue Mosque where less than 10 minutes later a suicide bomber killed at least 10 people.

Speaking to The Irish Times, Bishop Buckley who is based at Larne Co Antrim said “we missed it by seven to 10 minutes”. They were in the Blue Mosque when they heard the bomb detonate outside.

“Everyone ran out. We saw dust flying and could smell the explosives. People were running everywhere but police pushed us back towards the Mosque and we were locked into its yard, listening to the ambulance and police sirens. There was a fair little bit of panic,” he said.

He recalled how when he had served on Belfast’s Falls Road, from 1978 to 1983, he had heard explosions and shootings “but this was the nearest I’ve ever been to a bomb. We were lucky there were only four of us and a guide. He [suicide bomber] was waiting for a bigger group.”

The group chosen by the bomber was made up of “30/40/50 Germans and Norwegians. Obviously he wanted to do as much damage as possible.”

Bishop Buckley and his group were “shocked, sad for those killed and injured, and grateful to God we survived”, he said. “There are police and helicopters everywhere and people are being advised not to go around in large groups.”

He had only arrived in Istanbul on Monday night “on a private holiday with a few friends” but “people had told me not to come”.

“But I said that if I didn’t do it now I never would. I’ve wanted to see Constantinople all my life.The Christian connection, it’s part of our heritage,” said Bishop Buckley.