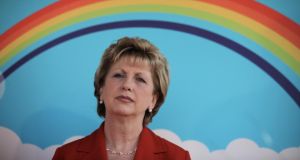 On Tuesday the Glasgow-based ‘Herald’ newspaper published comments by former Irish president Mary McAleese on gay priests. She said that “a very large number” of Catholic priests are homosexual and that the church had been in denial about homosexuality for decades. “It isn’t so much the elephant in the room but a herd of elephants.”

McAleese has form when it comes to the Catholic Church and homosexuality in general, not alone where priests are concerned. In her 2008 biography, ‘First Citizen’, she explained how she first became aware of the plight of gay people as a student in San Francisco in the early 1970s.

She was 21 and studying law at Queen’s University Belfast. Her job involved preparing food for airlines; a supervisor, “a charming, lovely man”, told her he was gay. They had become friends. He was wounded at being rejected by his family.

She recalled how “at school or university I was never aware of ever meeting a gay person, such were the taboos at the time. As a heterosexual I had wondered what it must be like for those who are outside the mainstream, the self-discovery, when you can reveal it to no one.”

That man was her introduction to the reality. “When I came back to Ireland I made it my business to do something about it,” she said.

Three years later, when she arrived at Trinity College Dublin as Reid professor of law in 1975, she and David Norris founded the Campaign for Homosexual Law Reform. In RTÉ interviews then she said Irish society had to contemplate formal gay relationships, like marriage.

In an article for the UK Catholic monthly the ‘Tablet’, published on March 15th, 1997, she wrote of how “women have observed the enormous drain of heterosexual males from the priesthood and the growing phenomenon of gay priests”.

She continued by writing that women “are quietly asking what is happening at the core of the call to priesthood that attracts homosexuals in much greater numbers than their population distribution would explain. These questions are not being raised in any homophobic way but are among the raft of questions bubbling to the surface as we struggle to come to terms with the manifest demise of the model of priesthood on which the priest-mother alliance was once founded and is now foundering.”

McAleese’s observation in the Glasgow ‘Herald’ that the Catholic Church had been in denial about homosexuality in the priesthood for decades is not an isolated one. In a US book, ‘The Changing Face of the Priesthood’, written in 2000 by Fr Donald Cozzens, former president of St Mary’s Catholic seminary in Cleveland, Ohio, the writer estimated that half of Catholic priests had a homosexual orientation.