Limerick priests to visit Paris to see what future holds

Eleven clerics travel to Evry-Corbeil-Essonne, where laity is more involved in church work 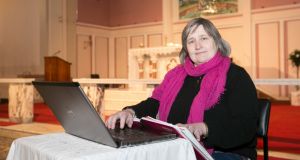 Mairi McMahon, secretary of the pastoral council in Ballyagran: “There’s no doubt the only choice we have is to reduce the number of Masses without closing churches.” Photograph Liam Burke/Press 22

Eleven priests from the Limerick diocese, where more than half of all priests are over 65, will on Tuesday travel to Evry-Corbeil-Essonne in Paris to see how the Catholic Church there is dealing with the collapse in vocations.

A total of 28 of the churches in the French diocese, one of seven in the city, are served by just five priests. For some, Evry is the future for the Catholic Church in Ireland, too.

Faced with collapsing numbers of priests, the Parisian diocese began 20 years ago to create teams – with a priest in charge, but with the laity involved doing much of the work.

“There are other examples of it around the world where there has been a break from the traditional parish model,” explained Fr Eamon Fitzgibbon, director of the Limerick Diocesan Synod and Episcopal Vicar for Pastoral Planning.

“We are going over on an exploratory visit, to see if we could do something similar here, or if we could adapt to this model. In many ways Paris is where we will be in 15-20 years. It is something we could learn from.”

Like others dioceses, Limerick is struggling with a shortage of priests. More than half of all of its 71 priests are over 65. Research carried out a number of years ago found that more than 50 per cent of clergy in the diocese were over 65.

Ten of its parishes have no resident priests but these communities are being served by priests living in nearby areas and retired clergy: “Priests are working 60 and 70 hours a week maintaining rotas and there’s a cost to that.”

He added that a number of men under 75 have had to take early retirement due to ill health or their health broke down, and that they didn’t want to have to consider closing churches.

“What I can see happening down the road – however many years into the future and it’s happening already on the continent – is that there will be churches that are not closed per say, but there isn’t a regular Mass every Sunday.

“During the week there is no reason why lay people could not lead prayer services or liturgies. The hope would be that churches wouldn’t be just closed down but it might mean that there isn’t a Sunday Mass there every Sunday of the month, it may be once a month,” he went on.

In some ways, Limerick is ahead of the game. In April, it will host Ireland’s first diocesan synod in 50 years where issues such as dwindling clerical numbers will be debated. The diocese began to unravel the traditional parish model over the past decade, bringing priests together in clusters who then cover the needs of several parishes.

Kilmallock and Newcastlewest in Co Limerick are two examples of where this is happening. Three parishes in the Kilmallock area no longer have a resident priest: Bulgaden/Martinstown, Glenrue and Castle-town/Ballyagran, but are served by priests living in Kilmallock. Mairi McMahon, secretary of the pastoral council in Ballyagran, works out the weekly Mass rota for three priests who say Masses, supported by four retired clergy.

“I am mindful of distances and times when I am rostering. You don’t want retired priests travelling too far on a Saturday night. The biggest challenge is Sunday Masses. I do the rota for seven Masses on a Sunday and three on Saturday evenings,” she explained.

“There’s no doubt the only choice we have is to reduce the number of Masses without closing churches. You will have situations where Masses will only be said in some churches once a month but these churches will not be closed, they will still available for funerals and weddings,” she added.

Ms McMahon, a married mother of four is also chairperson of the area pastoral council which takes in nine parishes. She said “If the laity doesn’t take on the role of getting involved the future is bleak. We need to accept ownership of our church. And there are plenty of people out there willing to take part.”

Fr Frank Duhig, the parish priest of Castlewest but who also is the administrator for the two parishes of Monagea and Feohanagh/Castlemahon, acknowledges parishioners’ worries about the future.

“The biggest fear the smaller parishes would have is losing their parish identity. For example in Newcastlewest there are 7,200 people, while there is only 1300 the Feohanagah/ Castlemahon area and 800 in Monagea. Smaller parishes feel threatened and their biggest fear is losing parish identity, but it is up to them to take ownership of their pastoral council and we have people doing that,” he said.