‘We too have had armed soldiers on our streets’, Eamon Martin tells Bethlehem mayor 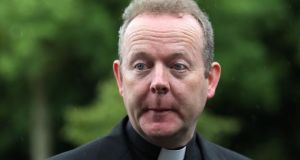 ‘Through our experiences in Ireland, we know the frustration caused by a seemingly endless cycle of conflict and the ever-present temptation to despair. We want to bring you hope,’ Catholic primate Archbishop Eamon Martin said. File photograph: Niall Carson/PA Wire

Catholic primate Archbishop Eamon Martin has spoken of attempts to discourage him and 177 other Irish people from visiting Bethlehem on their current eight-day pilgrimage of solidarity to the Holy Land.

Addressing Bethlehem’s first ever female mayor, Vera Baboun, a Catholic, Dr Martin said “when we first took up the idea of a ‘Christian Solidarity Pilgrimage’ some people tried to discourage us from visiting Bethlehem, or advised us to come just for a few hours before disappearing again across the checkpoint,” he said.

It was, he said, “never an option for us – we wanted to come and spend time with you.” A “central aim of our pilgrimage is to express solidarity with the Christians of this land,” he said.

“We know too of the struggles that are felt and experienced by the local communities who are weary of conflict, violence and injustice. Through our experiences in Ireland, we know the frustration caused by a seemingly endless cycle of conflict and the ever-present temptation to despair. We want to bring you hope,” he said.

“We too have had armed soldiers on our streets, heavily fortified checkpoints and security walls which interfere with the normality that ought to be daily family and commercial life.”

Dr Martin said that Irish people had lived with the daily threat of bombs and shootings and had seen how sectarianism, hatred and bigotry can turn neighbours into enemies, and culture and religion into difference and division.

At the same time, “through the great blessing of God that is the peace process in Ireland, we also know that resolution and reconciliation are possible and that violence and conflict can be overcome and replaced by peace and security,” he said.

But, he added: “We do not come to offer simplistic solutions to a complex conflict or with pious platitudes. We come with the only things we have: prayer and solidarity.”

On a visit to Dublin last February, Ms Baboun told The Irish Times about difficulties in gaining access to Bethlehem.

The so-called Israeli security wall there was “ in the middle of the city”, with “a new wall to be built to confiscate another 3.2sq km of territory”, she said.

It was “really ironic to live in a place where your movement is constrained for 63 years, and to consider this abnormality as normal,” she said.

Where Ireland was concerned it was “very important that a people who have experienced suffering understand the suffering of others. Very, very, very crucial,” she said.

Tourism in Bethlehem had been “critically affected” by the situation, with cancellations last Christmas reaching 40 per cent in what was, historically, a tourist city, she said.

Bethlehem governorate area has a population of 200,000, with about 38,000 in the city itself, one- third of whom are Christian, she said.