Islamic speakers visiting Ireland will be expected to abide by statement 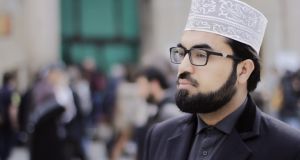 A Muslim anti-extremism declaration, drawn up to ensure that all visiting Islamic speakers to Ireland abide by norms of peaceful and respectful discussion and teaching, was officially launched at Trinity College Dublin last night.

It was also signed for the first time by visiting Muslim speaker Shaykh Fakhruddin Owaisi, chairman of the Council of Sunni Imams in Cape Town, South Africa.

Both Shaykh Owaisi and Shaykh Dr Umar Al-Qadri, chairman of the Irish Muslim Peace and Integration Council (Impic) and head imam of the Al-Mustafa Islamic Centre Ireland at Blanchardstown in west Dublin, were speakers at the TCD seminar held to coincide with the launch of the declaration.

Organised by Impic and chaired by Dr Andrew Pierce of the Irish School of Ecumenics, the seminar’s theme was “Preventing radicalisation within the Muslim community”.

The Belgian and Pakistani ambassadors to Ireland attended, as did diplomatic staff from France, Egypt, Turkey and Iran.

The anti-extremist declaration was drawn up by Impic.

Under a second heading, “Anti-recruitment for terrorist organisations”, the declaration states: “I will not promote conflicts from other parts of the world in Ireland and, in particular, I will not encourage people living in Ireland to participate in any such foreign conflicts.

“Specifically, I will not recruit any Muslim from Ireland to play an active role in any conflict in any other part of the world.”

On the issue of non-discrimination and equality, it reads: “I call for respect and tolerance for all humans and non-discrimination on any of the following nine grounds: racial group/ethnicity, religion, gender, age, disability, sexual orientation (LGBT), civil status, family status, or membership of the Traveller community.”