Muhammed would never have condoned people killing in his name, Dublin congregation told 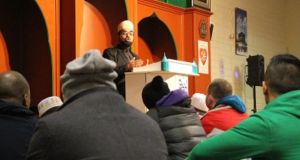 Shaykh Muhammad Umar Al-Qadri (Pictured) told his congregation at Friday prayers that the prophet Muhammad would never have condoned Islamic extremists who killed people in his name. Photograph: Ronan McGreevy

Muslims must accept there is a problem with extremists hijacking their faith, one of Ireland’s most prominent imams has said.

Shaykh Muhammad Umar Al-Qadri told his congregation at Friday prayers that the prophet Muhammad would never have condoned Islamic extremists who killed people in his name.

He said the prophet himself had highlighted extremism when he was alive 1,400 years ago.

Shaykh Al-Qadri addressed a packed congregation at Friday prayers at the Al-Mustafa Islamic Educational and Cultural Centre in west Dublin.

He told them there was no point in blaming extremist terror on the United States or the Jews. Muslims themselves were the biggest victims of extremism.

He referenced the killing of 140 children in Pakistan recently by the Taliban and the indiscriminate shooting of civilians by Boko Haram in Nigeria as two incidents where Muslims were the victim.

One of the policemen shot dead in the raid on Charlie Hebdo was also a Muslim, he pointed out.

“We as Muslims must admit and must accept that there is a problem of extremism among Muslims. We cannot deny it: IS (Islamic State), Boko Harem, Taliban, al-Qaeda. After accepting and acknowledging it, then we must put our heads together to do something about it.”

He condemned extremists as the “biggest blasphemers of all” and said they were anti-Islamic.

“He (Mohammed) condemned extremism in all forms,” Shaykh Al-Qadri said. “He said Islam is a religion of balance. He called extremists the worst of the worst people. He called them the dogs of hell.”

The imam recounted how, in his lifetime, Muhammad had been mocked, insulted and called a magician. He had to leave his home and seek refuge in Medina. While he was worshipping, he had camels intestines thrown on him.

“How did he deal with this? Did he take revenge on people?” Shaykh Al-Qadri asked. “No, he said he was sent by Allah as a mercy to everyone. “

The imam said the vast majority of Muslims condemned the killings in Paris and wished to distance themselves from them, but they had to speak out because such incidents were giving their religion a “bad name”.

“A lot of people assume because of these incidents that that is Islam. This is what these Muslims are told to do. They must be extremists, they must be terrorists,”he said. “Hence, it is out duty as Muslims to condemn such actions unconditionally whether we have a relation with it or not. It is affecting our reputation.”

Muslims have been the victims of racism and prejudice, Shaykh Al-Qadri said while stating that he had been called a “terrorist” and “Osama bin Laden” many times.

“There are no ifs or buts. Such actions have no place in Islam. Such actions would never have been supported by the prophet of Islam.

“It was the prophet of Islam who introduced freedom of religion and freedom of expression. Such actions can never been an Islamic action.

“The greatest blasphemy is committed by those who carry out such actions in the name of Allah. The best way to deal with mockery is the rule of law.”