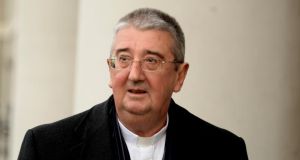 Archbishop Diarmuid Martin: Iona Institute director David Quinn said he raised ‘a very important point. The Government plans to protect the right of churches not to celebrate same-sex marriages, but this protection will appear only in legislation, not in the Constitution.’ Photograph: Cyril Byrne / THE IRISH TIMES

The Iona Institute has commended the Catholic Archbishop of Dublin Diarmuid Martin for raising concerns about what it describes as implications for the freedom of the Church if the same sex referendum is passed on Friday.

In his message on the referendum, read in Dublin parishes over the weekend, Archbishop Martin recalled that: “Some say that the change will not affect those who do not agree with it and will not affect marriages which take place in Church. No politician can promise that, since it will be exclusively up to the courts to interpret the changed constitution”.

Iona Institute director David Quinn said the Archbishop had raised “a very important point. The Government plans to protect the right of churches not to celebrate same-sex marriages, but this protection will appear only in legislation, not in the Constitution.”

He continued: “Should the referendum pass, a same-sex couple could demand a right to marry in a church. A court in the future would then have to balance a new constitutional right for same-sex couples to marry against the religious freedom provisions in the constitution.

“Who is to say what the court might decide? But if it is decided in favour of the same-sex couple, the legislative protections the Government is planning would mean nothing.”

In Denmark, he said “we have already seen that the Lutheran Church, a State Church admittedly, has been forced to conduct same-sex weddings. But can forcing all the other churches to do the same be far behind? If the marriage referendum passes we simply cannot rule out something of the same sort happening here. It is another reason to vote No.”

There is no State church in the Republic of Ireland.

Meanwhile, three interchurch groups have appealed to the Catholic Primate Archbishop Eamon Martin to request that priests in his diocese (which includes parts of Louth) allow inside their churches “only official church literature on the referendum and that he recommend to his fellow bishops to do likewise”.

The We are Church Ireland, Faith in Marriage Equality, and Gay Catholic Voice Ireland also suggested “the Archbishop might make a statement to acknowledge that a range of views are held within the Church and that Catholics after careful reflection may in good conscience decide to vote Yes.”

In a letter to Archbishop Eamon Martin they claim to “have observed literature inside churches from ‘Vote No’ campaign groups which is insensitive to gay people”.

Dr Richard O’Leary of the Faith in Marriage Equality group, claimed that at a Mass he attended in Kerry on Tuesday of last week the priest used the Prayers of the Faithful to lead the congregation in prayed for a No vote.

He requested that the Archbishop Eamon Martin “advise priests not to use prayers in this way during the Mass since directing people to the Bishops’ statements should be sufficient for campaigning”.

Organisers of Belfast and Derry protests could face prosecution 20:06
Green Party’s Catherine Martin confirms she will stand against Eamon Ryan 20:01
NCT and driver theory test centres to reopen from Monday 18:55
Call for the protection of midwifery-led maternity units 18:29
Brinks Cash Services to close three branches, with 160 jobs at risk 18:24