In the mould of an Old Testament prophet, Paisley founded his own church 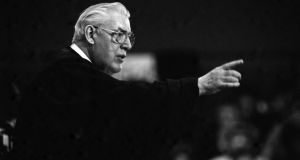 Ian Paisley preaches to the 12,000 strong congregation at the King’s Hall in Belfast on the 40th anniversary of the free Presbyterian Church. Photograph: Pacemaker

A gifted preacher with a coruscating turn of phrase, Ian Paisley was a compelling religious leader, whose energy, deep faith and passionately-expressed beliefs soon generated a large following.

This was particularly so where fundamentalist unionist Christians in Northern Ireland were concerned; those who had become disaffected by what they saw as pallid, lukewarm mainstream Protestant churches.

With his booming oratory and an assumed authority similar to that of an Old Testament prophet, he offered simplicity where others chose nuance.

The showmanship of his preaching style was referred to on Today FM yesterday by Liam Neeson, who said he “managed to hear the Reverend Ian two or three times.

“I snuck into the back of the gospel hall and heard him doing his thing,” said the Irish actor, who grew up in Ballymena. “Very, very powerful orator.”

His father James Kyle Paisley was an Independent Baptist pastor who served in the Ulster Volunteer Force alongside Edward Carson.

Ian Richard Kyle Paisley was born in Armagh city on April 6th, 1926, but was brought up in Ballymena, Co Antrim. Ian Paisley first came to prominence in a religious context via a row.

In1950, the 24-year-old was invited by the committee of Crossgar church hall in Co Down to conduct a gospel mission there in February 1951.

On hearing about sermons preached by young Rev Paisley at his Ravenhill Evangelical Church in Belfast, more liberal Presbyterians in Co Down became concerned. They went to the Down Presbytery of the Church seeking to stop the Paisley meeting at Crossgar. They succeeded.

But, or so it appeared, this did not percolate to local people at Crossgar and plans for the Paisley meeting went ahead.

On February 3rd, 1951, the Moderator of Down Presbytery demanded the people at Crossgar reverse their decision to grant Rev Paisley the use of their hall.

More hardline evangelicals among the locals saw this as further evidence of liberal corruption among Presbyterians and refused to ban the meeting.

On the night some locals, still unaware of this kerfuffle, made their way to the church hall only to find it closed. Feelings ran high as to why Down Presbytery closed the doors of their hall to the preaching of the gospel.

From such local rows do new churches arise. The opening service of the first Free Presbyterian Church took place on March 17th, 1951, at Crossgar.

In the 1960s, Rev Paisley developed a close relationship with the fundamentalist US Bob Jones University in South Carolina which awarded him a doctorate in divinity in 1966. Hence the ‘Dr’ in Dr Ian Paisley.

Anti-Catholicism and literal adherence to the word of scripture would be basic tenets of Free Presbyterianism, particularly in the early days. It was why he heckled Pope John Paul II at the European Parliament in 1988 as “the Antichrist”.

However, when Pope John Paul died in 2005 a more moderate Dr Paisley expressed his sympathies, saying: “We can understand how Roman Catholics feel at the death of the pope and we would want in no way to interfere with their expression of sorrow and grief at this time.”