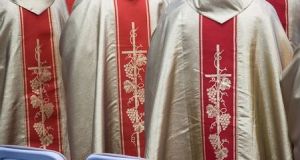 Under Article 40 of the Constitution, it is stated that: “ The publication or utterance of blasphemous, seditious, or indecent matter is an offence which shall be punishable in accordance with law.” File photograph: Getty Images

God should be removed from the Irish Constitution along with all references to such an entity, says the Humanist Association of Ireland (HAI).

So too should clauses which the association claims prevent non-religious people from being appointed president of Ireland or a judge without swearing a religious oath.

It has also called repeal of the 2009 Defamation Act under which blasphemy is a crime punishable with a fine of up €25,000.

In a statement to mark International Blasphemy Rights Day, HAI campaigns director Terry Flynn called on the Government “and all political parties, TDs and Senators, to repeal the blasphemy law, the 2009 Defamation Act, by supporting a referendum to remove references to God from the Irish Constitution”.

References to the divine in the Constitution begins with a preamble which states: “In the Name of the Most Holy Trinity, from Whom is all authority and to Whom, as our final end, all actions both of men and states must be referred, We, the people of Éire, Humbly acknowledging all our obligations to our Divine Lord, Jesus Christ, Who sustained our fathers through centuries of trial.....Do hereby adopt, enact, and give to ourselves this Constitution.”

Under Article 12, the Constitution advises that the President “shall enter upon [sic] his office by taking and subscribing publicly, in the presence of members of both Houses of the Oireachtas, of judges of the Supreme Court, of the Court of Appeal and of the High Court, and other public personages, the following declaration: ‘In the presence of Almighty God I do solemnly and sincerely promise and declare that I will maintain the Constitution of Ireland’.”

Where judges are concerned they too, under Article 34, must on assuming office declare: “in the presence of Almighty God I do solemnly and sincerely promise and declare that I will duly and faithfully and to the best of my knowledge and power execute the office of Chief Justice (or as the case may be) without fear or favour, affection or ill-will towards any [sic] man, and that I will uphold the constitution and the laws. May God direct and sustain me.”

Under Article 40 of the Constitution, it is stated that: “ The publication or utterance of blasphemous, seditious, or indecent matter is an offence which shall be punishable in accordance with law.”

In his International Blasphemy Rights Day statement, Mr Flynn pointed out that the Constitutional Convention, set up in December 2012, voted 61-38 “against retaining the existing Constitutional prohibition of blasphemy”.

He said “blasphemy laws are unjust” and that his organisation believes that, “in a civilised society, people have a right to express and to hear ideas about religion. Medieval laws have no place in a modern secular Republic.”

On a day set up “to show solidarity with those who challenge oppressive laws against free expression and to support the right to challenge prevailing religious beliefs without fear of arrest or persecution”, the HAI was “asking all political parties, all TDs and Senators to repeal this anachronistic blasphemy law by supporting a referendum to remove references to God from the Irish Constitution”.

The HAI believed “such a referendum should also include clauses that prevent non-religious from being appointed as president of Ireland or as a judge without swearing a religious oath”, he said.

1 Bobby Storey: The IRA's planner and enforcer who stayed in the shadows
2 Gardaí seek help in finding missing Roscommon toddler
3 Rare whale dies after getting into distress in Wicklow Harbour
4 Coronavirus claims one more life while 11 new cases reported in Republic
5 Covid-19: Travel restrictions to stay and 'green list' put on hold amid fears of second wave
Real news has value SUBSCRIBE