Opinion: Bishop’s opposition may stem from desire to have monopoly in the utterance of wise words 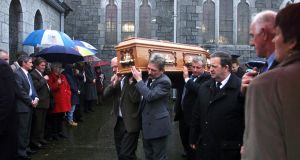 There is a communal need to grieve on the death of a loved one that is not entirely fulfilled by the liturgy. Photograph: Alan Betson

Brendan Grace brought the house down at a funeral I attended some time ago. He gave an entertaining and poignant tribute to the deceased, who was a close friend of his and was also a priest in the archdiocese of Dublin. Grace’s turn at the podium followed shortly after Archbishop Diarmuid Martin had also said a few words of tribute at the same event. Neither eulogy trivialised death or the Eucharist in the fashion about which Bishop of Meath Michael Smith appears to be so concerned. On the contrary, in their different styles, both Brendan Grace and Diarmuid Martin captured the character of the deceased, reflected the impact of his life’s work as a priest and brought some comfort to the bereaved.

I was at another funeral recently, in the Diocese of Ferns, of a man who had devoted much of his spare time to the local parish and community. This was reflected in a few words of tribute said in the church before Mass by a community leader, was captured during the Mass itself by the priest who although recent to the parish had come to know the deceased and respect his counsel, and was reflected again after communion by a family member who spoke of how the dead man’s life had inspired his extended family to contribute time to community and church.

At another funeral I attended a couple of years ago the priest paid a touching tribute to his mother, whose funeral it was. He spoke of how she had not only inspired his faith but had been a particular support to him in the lonely and difficult life of modern Catholic ministry.

All these tributes contravened the Catholic Church’s rules, which thankfully in most dioceses are observed more in the breach than observance.

Observance
One curious feature of the changing patterns of Catholic religious observance in this country is that while attendance rates at weekly Mass have collapsed and the rates of baptism and church weddings are falling, the extent to which Irish people abide by Catholic funeral rituals is almost as strong as it was half a century ago. It is estimated that fewer than 10 per cent of funerals held in Ireland each year happen in a place other than a church.

Truth be told, weddings and funerals are the only occasions where the majority of the Irish now see the inside of a church. Irrespective of the level of religious observance during their lifetime, almost all of those born and reared as Catholics in Ireland are buried in Catholic graveyards after a full funeral Mass in a Catholic church.

From purely a marketing perspective, therefore, it seems strange that those who presumably wish to encourage engagement with the church would insist on rules which serve only to alienate the church from the needs and wishes of the community at the one time when the general community is still minded to visit church premises and avail of church services. Those church leaders who chose to publish guidelines and emphasise absolute restrictions on what can and cannot be done in a church at or around a funeral must know that in so doing they put a wedge between the church and the bereaved at a vulnerable time. It may seem like a relatively trivial issue but for families denied the opportunity to say their words of tribute in the church, or have a friend say them on their behalf it matters a lot.

It is wrong, of course, to analyse the church’s actions in marketing terms but similarly it is wrong of those in the church such as Bishop Smith to view the function and purpose of the church service at the time of bereavement in strictly defined liturgical terms.

Most people, and it seems from the level of noncompliance most priests, see it as unnecessary to deny the family and the community the opportunity to know more about and celebrate the life by having somebody who knew the deceased speak of them. It can only be a good thing to allow for funeral services with a broader degree of personalisation than merely inserting the name of the deceased at specified points in the liturgy. It is peculiar that some condemn this as a “materialisation” of religion or “canonisation” of the dead

One can appreciate why any religious organisation might wish that such tributes be outside the order of the service itself, but to suggest, as Bishop Smith did this week, that any family tribute must occur outside of the church building is strange. Leaving aside the fact that church buildings are built and supported by community fundraising the notion that eulogy should occur at the graveside, where the mourners are subject to the vagaries of the Irish weather, or at some other venue or in the local paper is simply detached from the reality of everyday life.

One wonders also whether at the heart of this restrictive view is an arrogance that the uttering of wise words about the impact of a passing should be the preserve of a specifically trained, all-male priesthood. It is as if only priests can be trusted at such times to say what it is appropriate and do it well. Anyone who has sat through even a sampling of modern Irish Catholic sermons will attest that the standard of basic communication from the podiums of our churches is patchy to say the least.

Overall it smacks of a bureaucratic and arguably unchristian approach to the communal need to gather and grieve. The church should be tearing down barriers between the altar and the congregation, not re enforcing them.