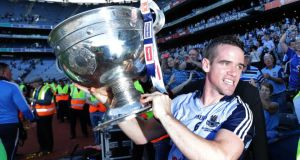 Dublin GAA footballer and teacher Ger Brennan this morning told students about his faith in God and his belief that faith is an important part of a holistic education as he helped launch Catholic Schools Week 2014.

Mr Brennan said the week presented an important time for young people to learn more about their faith and an opportunity for teachers to stop and reflect on their beliefs and “to inspire young people to go forward and continue to share their gifts and talents in the light of Christ”.

The two-time All-Ireland title winner, who grew up in a family of nine, and attends the Gardiner Street church in Dublin, said that, from a young age, he had that “great sense of belonging” in his church and parish which he said was further developed through his secondary education at Belvedere College.

Describing himself to the students of 14 local schools who came together in Saint Dominic’s College in Cabra for the launch, Mr Brennan said: “I am someone who believes strongly in Jesus Christ, I believe in God incarnate and I believe that Jesus is the example, the X-Factor, for people to follow their lives by.

“It’s something I’ve been fortunate enough to have accepted and believed in from a very young age starting at home and it’s something which I drift from time to time . . . but . . . once you experience the love of Christ in your life, be it through a personal, deep or more public experience there’s no getting away from him.

“For me, faith, love of God is always an invitation, a freedom of choice and it’s something we can choose to accept or something we can choose to ignore. I think there are many challenges in the world which support us in ignoring that love of God in our lives but I think if we keep continuing to focus on the goodness within young people and believe within yourself I think everything will work out fine.”

The Dublin senior centre back, who work as a teacher in St Kevin’s College on the Ballygall Road where teaches religion, Irish and history as well acting as a school chaplain, told the students to “focus on the good things in life, be grateful for what you have and if you can help others where you can and do it in the spirit of Christ I think you’ll do fine in life”.

Asked about the role of Catholic schools in Irish society, Mr Brennan said that, for him a holistic approach to education should include the “invisible reality” which he summed up as “my soul, my spirit, my faith in Jesus Christ”.

He said that, while school “teaches you about science, teaches you about maths and everything else, history and languages, I think to enable young students to have the skills to pray, to reflect, to look at what’s really important in life I think that’s one of the key components or key characteristics which makes Catholic school very different to non-denominational schools”.