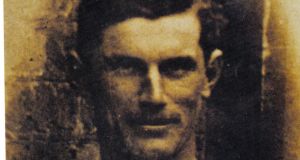 Michael Hogan, the Tipperary footballer who was killed at Croke Park on Bloody Sunday on November 21st, 1920

The GAA will mark the 95th anniversary of the events of Bloody Sunday, November 21st, 1920, at a special ceremony in Croke Park tonight before the start of the Eirgrid International Rules test match between Ireland and Australia.

On that day British forces fired into the crowd attending a Dublin-Tipperary football challenge match, killing 14 people, among them Tipperary player Michael Hogan (24).

At 6.40pm, stadium lights will be dimmed and 14 flames will be lit on Hill 16 to represent the lives lost. The names of each of those killed will be read out. There will be no spectators on Hill 16 for the game and the flames will remain lit for the evening.

Flag bearers will lead GAA president Aogán Ó Fearghail and general secretary Páraic Duffy to the spot on Croke Park where Michael Hogan was shot, opposite gate 41 at the junction of Hill 16 and the Cusack stand. They will lay a laurel wreath, which will followed by a moment of silence.

The Hogan stand in Croke Park is named after the footballer. The jersey he wore that day, with two bullet holes, is on display alongside the match ball at the GAA museum in the stadium. The jersey is on loan from Tipperary County Museum and the ball is on loan from the Poitín Stil at Rathcoole, Co Dublin. It is the first time these items have been on display at Croke Park.

Meanwhile, November 21st also marks the bombing in 1974 of two pubs in Birmingham by the IRA, killing 12 people, for which six innocent men served 16 years in prison.