Funeral held for man who died in Norfolk helicopter crash 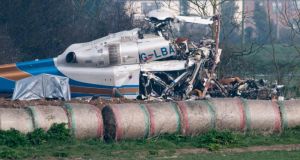 Wreckage of the helicopter which crashed in Gillingham, Norfolk, on March 14th, killing all four occupants, of whom one was Declan Small. Photograph: Jason Bye

Mr Small (42) was killed when the helicopter in which he was travelling came down in thick fog at Gillingham in Norfolk at about 7.30pm on Thursday. Also killed were Northern businessman Lord Ballyedmond – Edward Haughey – and the two pilots, Carl Dickerson and Lee Hoyle.

Mr Small is survived by his mother Margaret, his brothers Micheál, Shane and Anraí, and his girlfriend Bernie.