Fr Tony Flannery reveals he was sexually abused as a child 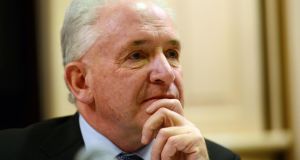 Fr Tony Flannery: said his abuser was “long dead. I hope he is at peace.” Photograph: Alan Betson

Fr Tony Flannery, the founder member of the Association of Catholic Priests (ACP) who has been facing criticism over a call to allow priests re-enter ministry after offending, has disclosed

he “experienced sexual abuse as a young boy over a period of time”.

His abuser was “long dead. I hope he is at peace” but it was why “I believe that maybe I have some right to have my say on the topic”.

Writing on his www.tonyflannery.com website, he was responding to those who criticised his report on a meeting he and Fr Seán McDonagh, both representing the ACP, had with the National Board for Safeguarding Children (NBSC) in Maynooth last Wednesday.

In it, he said they “raised the difficulties around historical allegations, and the fact that many older priests are excluded from ministry because of a mistake or mistakes they made in their earlier life, and where there was no pattern of re-offending”.

They also encouraged the NBSC “to act with compassion” in audits as “because of the publicity each tranche of audits receives, they amount to a public rating of the bishop or superior. And the content of the audit can have major impact on the lives of individual priests.”

Fr Flannery has since added, in a clarification on the ACP website, that “I fully accept that the word ‘mistake’ was not the best choice of word in the circumstances”.

Marie Collins, who was abused by a priest as a child, said: “There seems to be a belief in the ACP that using the word ‘historical’ somehow magically turns a vile crime against a child into a mere indiscretion”.

She said any priest who had “assaulted a child” had “forfeited his right to be trusted with children”.

Fr Patrick McCafferty, also abused by a priest, described the report as “despicable. Again and again, the so-called ACP shows itself to be pro-perpetrator and completely unmindful of the devastation wrought in the lives of those on the receiving end of . . . so-called ‘mistakes’.”

Dr Margaret Kennedy, abused by an Anglican priest, said: “It seems to me that the ACP ‘representatives’ have failed utterly to reflect on how their ‘representation’ impacts on the hearts, minds and souls of victims of clergy sexual abuse.”

Fr Flannery said that “in my work with the ACP over the past three years I have listened to the stories of a great many old priests whose lives have been shattered by the visitation of an accusation from the distant past”.