Fr Brendan McBride, a friend to the Irish in San Francisco 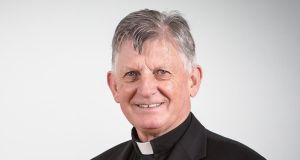 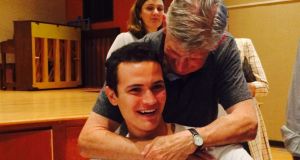 Fr Brendan McBride with Niall Murray, one of the students injured in the Berkeley balcony collapse.

Fr Brendan McBride walks around the Irish Immigration Pastoral Centre on Geary Street in Richmond, a neighbourhood in San Francisco that many emigrants from Ireland call home.

Down the hall from his office is a meeting room where the centre hosts a range of activities for the Irish community.

“They hold AA [Alcoholics Anonymous] meetings here. The bartenders have their own meeting - they call it ‘The Last Call’,” he said, with a wry smile, as he showed The Irish Times around.

Fr McBride’s sense of humour is as large as his sense of humanity. An immensely well-liked and hard-working representative for the Irish in the San Francisco Bay Area, the Donegal-born priest has been a fixture in this distant outpost of Ireland for almost two decades.

He arrived here in 1996 and founded the centre the following year. As president of the Irish Apostolate in the United States, he is the representative of the Irish Catholic Church in the country, coordinating chaplaincy services for the Irish who need support across the US.

The work of the Portnoo native has extended well beyond the US west coast. In the 1970s and 1980s, he helped emigrants arriving in Coventry, New York and Philadelphia fleeing joblessness at home, in between stints in parishes back in his native Donegal.

For his work, Fr McBride has been recognised with one of Ireland’s highest honours - a Presidential Distinguished Service Award.

The citation released by the Department of Foreign Affairs last month said that the priest “has committed his life’s work to serving the Irish community through advocacy and provision of support services”.

His San Francisco centre is the go-to place for Irish immigrants, be they J-1 students or older arrivals, seeking a job or accommodation.

For the thousands of J-1 students every year, the centre is a welcoming beachhead for their summer of adventures.

The centre distributes its “J-1 Bible” of information every year, said Fr McBride.

It is a measure of the man’s work that the decision to honour Fr McBride was made before the vital work he did in the aftermath of the balcony collapse in Berkeley in June, which killed five Irish J-1 students and an Irish-American, and seriously injured seven others.

The priest was on the scene of the accident within hours of the balcony collapsing.

Later, at Highland Hospital in Oakland, where the most severely injured were taken, he comforted students as the news of the deaths of their friends filtered through.

His work continued around the clock over subsequent days, as he helped those arriving in from Ireland.

One moment stayed with him in particular: when the owner of the restaurant where one of the students killed in Berkeley, Eimear Walsh, had worked gave her first paycheck to her parents when they visited.

“It would tear the heart out of you,” he said, recalling one of the many moving moments during those difficult days.

Fr McBride’s words - privately with the family and friends of the students at the Berkeley crisis centre and at the remembrance masses afterwards - were a balm for those in the depths of grief.

At the month’s mind mass to the victims in St Philip’s Church, next to his home in the Noe Valley neighbourhood, Fr McBride said the Berkeley Six would be “a beacon” to all Irish J-1 students following them to California and will “loom large in all our lives”.

His work continues. When the phone rings at the pastoral centre, it is almost always someone looking for Brendan, wanting him to be somewhere, says Celine Kennelly, the centre’s executive director.

“We are in the middle of a very difficult age for the Catholic Church and whether people want to be part of it or not, very often our belief is attached to a person, to someone who is a rock who supports you and can provide comfort - that is Brendan in our community,” she said.

Outside the Bay Area, Fr McBride has helped build the Coalition of Irish Immigration Centres into an effective cooperative network, coordinating the efforts of centres into a national message to promote the needs of Irish immigrant communities across the US.

“He is the glue who keeps them all attached,” said Philip Grant, Ireland’s consul general in San Francisco.

“He is extremely down to earth and approachable, if you go to church or don’t. He is a great leveller in terms of bringing people together.”

Asked about the award from President Michael D Higgins, Fr McBride, humble as ever, prefers to share the glory.

“I was chuffed to get it on behalf of all the people who supported and worked for me over the years - it is really for them; they are the ones who did the heavy lifting,” he said.

Friends say Fr McBride, a big sports fan, would have been a professional golfer if he hadn’t become a priest.

He used to be a “scratch golfer”. Asked about two important figures in his life - his golf handicap and his age - he replied: “Both are ascending - 7 and 72.”

“He is a chaplain of sorts to the Irish golfers,” said Ms Kennelly.

“They always have phenomenal time for Brendan.”

A regular visitor home, the priest enjoys much repeat business officiating at weddings and christenings, many in the same families.

“He is a man of the people who wears his collar lightly, or not at all,” said Mr Grant, explaining his popularity in Ireland and the US.