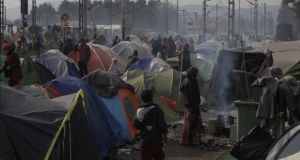 Image: Screengrab from ‘The Border’

The Grand Prize in Irish Council for Civil Liberties (ICCL) Human Rights Film Awards was won on Thursday by Caoimhe Butterly for her short documentary The Border – an examination of life at the Idomeni border crossing in Greece.

It highlights the dislocation of the more than 12,000 women, men and children migrants who were stranded there earlier this year and the real impact of European border closures as expressed by those most directly affected.

The ICCL Human Rights Film Awards are the only short film awards in Ireland dedicated to human rights and five such films were shortlisted for the Grand Prize this year.

They were Backlash by directors: Nuala Cunningham and Ciaran O’Connor on violence against defenders of human rights; Breath by director James Doherty which looked at gender identity in the Travelling community; Sumud: Everyday Resistance by directors Emmet Sheerin and Bryan Duffy on life under Israeli military occupation in the West Bank; Swap by directors Masood Eslami and Qafar Azad which tells the story of an Afghan family and; The Border.

Speaking about her documentary Ms Butterly said it addressed “the largest movement of those forcibly displaced since the second World War but its media representation too often played into stereotypes. The Border captures the pain of the people we met, but it also shows their strength.”

The Border can be viewed online here.