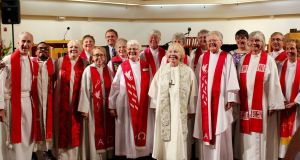 An Irish-born member of a breakaway Catholic group which welcomes female and lesbian priests presided over a religious service in Dublin on Sunday.

Dr Bridget Mary Meehan, who is originally from Rathdowney in Co Laois and is now based in Florida, has the position of bishop within the Association of Roman Catholic Women Priests.

She holds weekly services with parishioners at a Christian church in the city of Sarasota, and says she responded to an invitation from a faith community of “reform-minded Catholics” to celebrate the Eucharist at a community centre in Rialto.

Her organisation has ordained around 230 female members around the world, and she wants the orthodox Catholic Church to accept women as well as gay and transgender individuals into the clergy.

“I’m going to celebrate an inclusive Roman Catholic liturgy just like everybody has in their churches in Ireland. I’m going to celebrate that with a local community here of renewed, reform-minded Catholics who are interested in justice and equality for women in the church,” she said at the weekend.

Dr Meehan said her services are attended by a diverse congregation rather than just like-minded women, but added that there was no attempt made to persuade Catholic authorities to allow the celebration be held in a consecrated church.

“We thought why bother causing a problem with the hierarchy because they’re not ready for it,” she told The Irish Times.

Her movement has been officially excommunicated by the Catholic Church since its inception in 2002, when it was claimed a male bishop privately ordained a number of female bishops on the Danube river, and is generally prohibited from holding services on church property.

Dr Meehan says that among a number of women she has ordained, she has also ordained two male priests, one of whom was gay.

She contends that women formed an integral part of the clergy in the early Christian Church and that some of Jesus’ own apostles were female. The Association of Roman Catholic Women Priests does not impose a strict policy of celibacy, unlike its orthodox equivalent.

“The Catholic Church must follow the example of Jesus who embraced everyone at the table. Gays and lesbians, transgender, divorced and remarried and all that are on the margins and are alienated should be welcome at the table of the Eucharist,” remarked Dr Meehan.

According to her, Pope Francis has softened the Church’s rhetoric around the concept of female vocations and she is hopeful that women priests and bishops will be accepted into the institution in future.

“Our challenge to Pope Francis, lovingly, is that we are happy you’ve changed the tone but we’re asking you to change the teaching so that justice and equality and inclusivity can become the values of the Church,” she said.

Dr Meehan added that while she is happy to preside over the first known service of such a kind in Ireland on Sunday, she does not sense any great appetite for change in the Irish Catholic community.

“I don’t know, I think your climate is very different from the climate we have in the States.”

1 More than 30 people queue overnight to secure property in Carlow
2 Coronavirus: Further 430 cases reported in State is most in a day since April
3 Trump paid no federal income taxes in 10 of past 15 years – report
4 Derry, Strabane and Donegal Covid-19 case rates lack ‘clear signal’
5 Gardaí appeal for information on rape of teenager in Co Mayo playground
Real news has value SUBSCRIBE