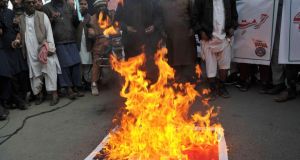 It is believed the campaign is the first ever to focus solely on laws against blasphemy, including legislation on ridicule and insult to religion or hurting religious sentiments.

The coalition behind the campaign, led by the International Humanist and Ethical Union (IHEU) and the European Humanist Federation (EHF), represents about 200 humanist and secular organisations around the world, including Atheist Ireland. The campaign is open to all who oppose blasphemy laws, including religious and secular communities, human rights groups, and all advocates of freedom of expression.

Sonja Eggerickx, president of IHEU, said that “in the wake of the Charlie Hebdo killings there have been renewed calls to abolish blasphemy and related laws in almost every country where they still exist. Our organisations have worked for many years to protect this important right: to question, criticise, and yes, even ridicule, religion.

“The idea that it is wrong to satirise religion lends false legitimacy to those who murder in the name of being offended. The idea that it is taboo to question or to criticise religious authorities is one reason why sexual abuse in the Catholic Church persisted so long.”

Pierre Galand, EHF president, said: “Our campaign does not target laws against incitement to hatred, which are legitimate. What we are concerned about is laws which restrict freedom of expression about religion. As a first step, we want to see the remaining laws against blasphemy and religious insult in Europe repealed.”

Atheist Ireland criticised the Cabinet decision not to hold a blasphemy referendum in the lifetime of this Government, despite an earlier promise to do so. It said it would be meeting officials from the Department of Justice next week and Taoiseach Enda Kenny the following week, where “we will be asking the Government to comply with its promise of a referendum to repeal the Irish blasphemy law.”