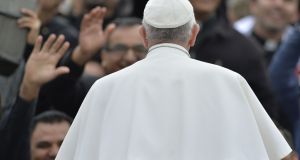 Looking forward: Pope Francis has made it clear on at least two occasions this year that he wants results from the Synod on the Family, which begins in Rome tomorrow. Photograph: Andreas Solaro/AFP/Getty Images.

Will the second Synod on the Family, which opens in Rome on Sunday, live up to its billing as a potentially key moment in the ongoing reform of the Catholic Church by Pope Francis?

Or will the pope’s best-laid plans fall foul of a 2,000-year Vatican corporate culture which, in the words of one insider, “eats strategy for lunch”?

Secular media are fond of referring to a Vatican Synod of Bishops as the Holy See’s “parliament”.

In reality, of course, it is no such thing. Parliaments debate and then, all being well, they enact legislation. The synod, on the other hand, is merely a consultative body which decides nothing. The real decisions are made after the synod by the pope, with or without reference to the “advice” offered to him by the synod fathers.

So, in a sense, this synod poses two big questions. Firstly, how will the argy-bargy between the episcopal galacticos go this year, one year after the first, controversial Synod on the Family?

And secondly, if there continue to be major disagreements about communion for the divorced, the pastoral approach to homosexuals or about other issues, will Pope Francis pay much attention or will he just push ahead with his reform process, anyway?

Within its own context, though, the synod could well see important pastoral change with regard to so-called hot-button issues such as communion for the divorced, a greater inclusiveness towards gays and an acknowledgment of same-sex relationships. In this latter context, this summer’s Irish same-sex marriage referendum result may focus minds.

Even if the overwhelming thrust of the Francis pontificate is aimed at redressing the imbalances created by a dispossessed global south, that is not to say that the synod is without importance. It, arguably, forms part of the recalibrating process in which the “church of the poor, and for the poor” attempts to deal with the every day problems of Catholic families, rich and poor.

In the US last week and in Latin America in July, the pope made it clear that he wanted results from the synod.

In one sense, too, Francis has already jumped the gun. Last month, he enacted two motu proprio (pontifical) decrees that should make church marriage annulments both cheaper and more easily obtained. Marriage annulments were a sticking point at the first synod last year but in one wave of the pontifical wand, Francis has taken it off the agenda without, in the process, making any doctrinal changes.

Even if many in the Holy See suggest that this year’s synod will not see anything like the dramatic public squabbles of last year’s gathering, this is still an occasion that will reflect many of the ongoing tensions in the universal church – conservatives v reformers; Africans v the developed West; the local churches against the Vatican Curia; the perception of some that there is not enough theology in the Francis pontificate as the church risks becoming some sort of global NGO.

That may well be. What is true is that in November of last year, Cardinal Burke was removed from the head of the Vatican’s supreme court to a post as patron of the Order of the Knights of Malta.

Traditionalists also argue that the 45 delegates picked by Francis include prelates who “publicly support positions contrary to the teaching or practice of the Catholic Church” (see LifeSiteNews). That is a big accusation, given that the suspect prelates in question include people as diverse as Cardinals Schönborn, Tettamanzi, Kasper, Daneels and Rodríguez Maradiaga.

In the meantime, what do we read in to a one-day study meeting in May at the Pontifical Gregorian University in Rome, hosted by the presidents of the bishops conferences of Germany, Switzerland and France, namely Cardinal Reinhard Marx (a member of the pope’s nine-man Privy Council), Bishop Markus Büchel and Archbishop Georges Pontier?

Early last month, Cardinal Marx’s compatriot, Cardinal Gerhard Müller, prefect of the Congregation of the Doctrine of the Faith, speaking in Regensburg, warned against potential bitter divisions if the church’s teaching on issues such as marriage and sexuality was constantly brought into question by church figures. All in all, there could be more arguments up ahead.

Change, too, is a relative word around here. Recent confirmation of this came from no less a source than Lord (Chris) Patten, the last governor of Hong Kong and a former chairman of the BBC Trust. Patten spent much of the last year heading a Vatican committee, charged with reviewing the Holy See’s media operations.

His committee made its recommendations but when the pope finally named his new secretariat for communications in late June, it turned out that three of the four men appointed to run the new body were Italian, while the fourth was Argentine.

Hardly an ideal conclusion for a media business in which the English language is not exactly unimportant. Just a bad decision or had the corporate culture eaten more “strategy for lunch”?

Mind you, Patten also reported that his committee was of the opinion that “if ever reform were to be feasible, it would be now under the guidance of Pope Francis. In short, if not now, when?”