Rome Letter: It’s clear the pope is in a good place mentally and physically 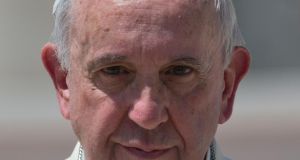 Pope Francis had a busy week at the Vatican, from meeting Cuban president Raúl Castro to grappling with the Israeli-Palestinian question. Photograph: AP Photo/Alessandra Tarantino

As he came out of the Paul VIth hall and made his way back to his quarters in the Domus Santa Marta, Pope Francis appeared to be engaged in serious conversation with Archbishop Georg Gaenswein, the prefect of the papal household. He had just held an hour-long, early-morning meeting last Sunday with Cuban president Raúl Castro and evidently there was much to be said.

When he walked across the little courtyard between a line of Swiss Guards on one side and the small Vatican press pool on the other, however, he was interrupted by a greeting from Mexican colleague Mercedes De La Torrey:

“Buenos Dias, Santita”, she shouted across to him.

Now if there is one thing that will make Pope Francis prick up his ears, it is anyone shouting a bit of Spanish at him. He stopped his chat with Archbishop Gaenswein immediately and, beaming across at us, said:

“Good day to you . . . I have ruined your Sunday on you with this [early start], no?” Then with a big laugh he went on his way, but not without reminding us to “pray for me”.

As he heads into his third year on the seat of Peter, Pope Francis is plainly in a good place mentally and physically. More importantly perhaps, in a week when he met with both Cuban president Raúl Castro and Palestinian state president Mahmoud Abbas, and when controversial church men such as liberation theology founding father Gustavo Gutierrez and English Dominican Timothy Radcliffe turned up in the Vatican, the “Francis revolution” is clearly in full swing.

“Liberation theology cannot be rehabilitated since it was never ‘dis-habilitated’ . . . the core notion of Liberation Theology was the preferential option for the poor, this is 90 per cent of it . . . I think though that at this moment the ‘climate’ around liberation theology has changed . . . and in that context talking about the poor, talking about the periphery [as Pope Francis does], well you can call that a rehabilitation if you like . . . ”

Father Gutierrez had been summoned by the outgoing president of Caritas International, Honduran cardinal Óscar Rodríguez Maradiaga, to help him present last week’s Caritas general assembly in Rome. Thirty years ago, when Rome had summoned him, it was to wrap him over the knuckles for teachings that the Congregation for the Doctrine of the Faith (then under the guidance of Cardinal Joseph Ratzinger, later Pope Benedict XVI) considered Marxist.

Remember, when Fr Radcliffe was asked to speak at last year’s Divine Mercy Conference in Dublin, the invitation annoyed many with the conservative Eternal Word Television Network opting not to cover the event. Among other things, traditionalist Catholics tend to distrust Fr Radcliffe’s positive views on same-sex relationships.

Francis began the week with an event which undoubtedly marked the biggest diplomatic success of this pontificate so far – his important contribution to the process of the US-Cuba detente. He ended it grappling with one area where, like so many before him, he has thus far achieved little, namely the Israeli-Palestinian conflict in the Holy Land. He hasn’t given up on that one though.

The Francis effect, it would seem, is only just getting going.