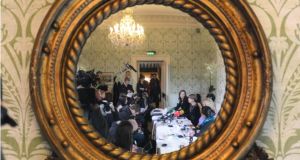 A Justice for Magdalenes press conference in Dublin last February: the group accuses the McAleese report of “marginalising the women’s lived experiences in these institutions”. Photographer: Dara Mac Dónaill

The Department of Justice has sharply criticised a submission by the Justice for Magdalenes (JFM) advocacy group to the McAleese committee on the extent of abuses in the Magdalene laundries.

The group had claimed that the McAleese report, published last February, minimised the physical and psychological abuse suffered by women in the laundries, as reported in its submission.

The McAleese report was also criticised by Felice de Gaer, rapporteur to the UN Committee Against Torture (Uncat), who wrote to the Government on May 22nd last on the issue.

She said Uncat had received information that the State was presented with extensive survivor testimony by the group “and was aware of the existence of possible criminal wrongdoings, including physical and psychological abuse”.

In its response to Ms de Gaer, the Department of Justice has acknowledged that JFM “did present a great volume of material purporting to point to the existence of possible criminal wrongdoings, including systematic physical and psychological abuse”.

However, it says “many of the general allegations relied on reports unsupported by any direct knowledge and were not supported by the facts uncovered by the McAleese committee.”

It continues: “As regards ‘survivor testimony’, we understand that JFM had to rely on a relatively small number of accounts. The testimony of 10 women was provided [by JFM] to the McAleese committee.

“Seven of these were identified – three were anonymous. This contrasts with the much larger sample of the testimony of 118 women available for the McAleese report.”

It says that “of these 10 accounts provided by JFM, none described systematic physical abuse or torture, although four referred to isolated incidents of physical punishments. The remainder made no reference to physical abuse. None of the testimony has been ‘tested’ in civil, criminal or other proceedings.”

It recalls that “in the JFM submission to Uncat dated May, 2011, there is reference in appendix II to ‘Selected witness testimony’ included in the 2009 Report of the Commission to Inquire into Child Abuse.”

It says the testimonies“are from women who had transferred to residential laundries from industrial or reformatory schools. The reference by JFM to testimonies given to the commission by these women could be interpreted as meaning that there is evidence regarding the Magdalene laundries that has been subject to cross-examination and whose credibility has been tested and given appropriate weight by a tribunal. That is not the case.”

Last June, Claire McGettrick of Justice for Magdalenes said it shared many of the concerns raised by the UN committee.

The group had submitted 796 pages of testimony to the McAleese inquiry team, but “not one syllable” drawn from those documents appeared in the final report, she said.

“The McAleese report should not have gone as far as alleging that there was little abuse in the laundries because that’s simply not true.”

In a follow-up statement on June 18th, the group said it was “deeply troubled that the IDC final report [McAleese report] ignored the 793 (sic) pages of transcribed survivor testimony submitted on behalf of 11 women, four daughters, three family members and four additional witnesses.”

It continued: “In the process, we contend that the IDC final report marginalises the women’s lived experiences in these institutions, minimising the physical and psychological abuse suffered, while evading the human rights violations.”