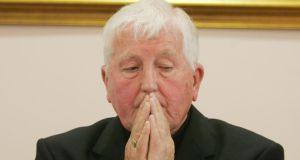 Bishop Christopher Jones said Accord was “pleased to be busier than ever as we support couples preparing for the sacrament of marriage”. Photograph: Alan Betson/The Irish Times

Where cost is concerned, Accord’s services are based on the needs of clients, not ability to pay, ensuring that those under financial pressure can access its counselling services at a cost they can afford.

An agency of the Irish Catholic Bishops’ Conference, it operates 58 centres throughout the island of Ireland.

Accord president Bishop Christopher Jones said yesterday it was “pleased to be busier than ever as we support couples preparing for the sacrament of marriage”.

Feedback from clients “has been positive and speaks for itself” with more couples participating in Accord marriage preparation courses, he said.

Accord’s figures were launched at Whitefriar Street Carmelite church in Dublin yesterday at the shrine of St Valentine, where engaged couple Helen Young and Conor Kavanagh were blessed by Fr Bernard Murphy, curate at the church.