Church of Ireland primate asks politicians North and South ‘what is their vision’?

‘People want to see hope, they want to believe’ 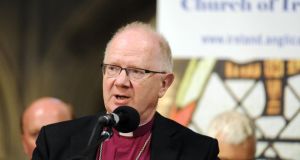 Archbishop Richard Clarke:“there is hopelessness in our land that we must also challenge in the name of Jesus Christ.” Photograph: Dave Meehan

The Church of Ireland primate has warned against hopelessness in Ireland. Archbishop Richard Clarke said “there is hopelessness in our land that we must also challenge in the name of Jesus Christ. ”

In his presidential address to the Armagh diocesan synod today, he said “we have not only the right but the Christian duty to ask those who are entrusted with the political leadership of this country what is their vision of hope for all.”

Where Northern Ireland was concerned he said “I believe that the vast majority of people want the talks at present being mooted as a means of resolving difficulties between the different political viewpoints to be pursued with integrity, energy and commitment. We want the talks to work.

“People want to see hope, they want to believe that those who lead our country are actually interested in holding out hope for all the communities of Ireland, and within both the jurisdictions represented in this diocese.”

Referring to rising fatalities in traffic accidents he pointed out that road safety was “a moral issue” which could “affect any one of us and any person we love without any forewarning.”

He said, “we should all, young or old, take to heart the Christian imperative that we accept the gift of the life we have been given, and that others have been given, with a genuine reverence.”

Meanwhile “throughout this island, the high level of suicide is terrible and terrifying.” As Christians “we can give hope, where a person feels only darkness and hopelessnes,” he said.

Looking outward he said “people throughout the world are in the grip of fear. If we were to put a name on the two things that symbolise globally the fears of today, they would be the words ‘ISIL’ (or ISIS) and ebola. One is a fear of other people. The other is the fear of a killer disease.

“The saddest aspect of it all is that these seem only to have become real fears for many in the western world when ISIL and ebola, in their different ways, began to affect white westerners, ‘people like us’.”

It was only “when we can grasp, and accept in our hearts, that in God’s eyes there are no ‘people like us’ and ‘people not like us’, can we begin the process of bringing hope, a hope that begins with real solidarity, to those around us,” he said.