Church must be ‘restructured’, says Archbishop of Dublin 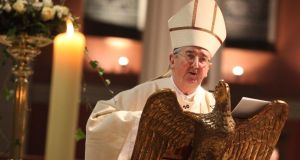 “Newness and life will not come out of a church which still wants to look on itself as an institution of power,” Catholic Archbishop of Dublin Diarmuid Martin said in his Easter vigil homily in St Mary's Pro-Cathedral Dublin. Photograph: John McElroy

The church “has to be restructured and destructured to allow it to witness to the sense of meaning and purpose that Jesus brings to the lives of believers,” the Catholic Archbishop of Dublin Diarmuid Martin has said.

“Newness and life will not come out of a church which still wants to look on itself as an institution of power, even a renewed institution, or from a church which is simply a focal point of organised doing good or social reform,” he said. It had to “witness more concretely to the message of Jesus,” he said.

“We have to live in such a way that the energy of life and vitality which spring from Jesus’s resurrection can really touch our hearts and change our church,” he said.

In his Easter vigil homily at Dublin’s Pro Cathedral, he said, “For us believers, the resurrection is not something that we explore with the eye of the historian or the archaeologist or the investigative journalist who gathers evidence or documents to discover possibly what an event of the past might have looked like. We look at the resurrection from the point of view of faith, a point of view which is no less real,” he said.

‘Passion for life’
It represented “the highest and most mysterious event in the whole of human history”. It bestowed “a passion for life, for truth and for the good,” he said.

“If Christians have a passion for life then they should be in the forefront in the fight for life, at every moment of its existence . . . The church and the Christian community must be ‘pro-life’ in the fullest sense of that term. We have to defend the right to life and we must at the same time always accompany that defence with a commitment to ensure that all can live their lives with a level of dignity worthy of the Lord of life in whose image they have been created,” he said.

The church of Ireland Archbishop of Dublin Michael Jackson said the Easter message was “of real significance to us as we find ourselves facing more and more unavoidably into an understanding of Christianity which has become far too settled in on itself”.

It has become “over-anxious about its orthodoxy (correct teaching) as opposed to its orthopraxy (correct doing) in the face of those who genuinely seek to be their best for God and to do their best for their neighbour within their strengths and their limitations. Christianity has become rather too good at ‘getting at’ people,” he said.

“An unfussy rubbing along with others and the genuine capacity to compromise – these are the characteristics which Augustine singles out as essential not only to survival but to flourishing on the Ark of Noah in a truly Catholic spirit,” he said.