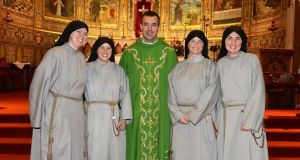 The story of Christianity in Ireland appears to be coming full circle, at least in its Roman Catholic manifestation. Four nuns, three of them children of the Irish diaspora, have established St Colette’s, a convent in a modest house in St Mary’s parish in Drogheda.

Sr Jacinta, Sr Monica, Sr Veronica and Sr Kelly Francis – all members of the new Franciscan Sisters of the Renewal – arrived earlier this month and were formally welcomed at a Mass in St Mary’s church last Thursday.

Newly-arrived nuns in an Irish town are not usually welcomed in person by a cardinal, a papal nuncio and two bishops. The reason, it must be said, lies in the symmetry.

Writing in the US Catholic New York newspaper, Cardinal Dolan explained: “The faith given me by God, at baptism, through my parents, was enhanced mightily by Sisters of Mercy who came from St Mary’s Convent in Drogheda, Ireland, to teach at Holy Infant School, Ballwin, Missouri, in August 1957.”

Dwindling numbers
In 2010 he learned that the convent in Co Louth was to close, due to dwindling numbers. “For the first time since 1858, Drogheda’s Convent of Mercy had no Mercy Sisters, ” he said.

He spoke to Bishop Smith, who “beamed” at the idea of the sisters coming to Drogheda. Likewise the parish priest at St Mary’s, Fr Denis Nulty, now Bishop of Kildare and Leighlin.

Cardinal Dolan said: “The blessed cycle of evangelisation remains unbroken. What we receive as gift, we give as gift.”

And so it was that Sr Jacinta and Sr Monica spoke to The Irish Times in a brightly refurbished St Colette’s in the wake of their arrival, the smell of fresh paint wafting a warm, if slightly pungent, welcome.

Both sisters exuded the joy of newly-weds just moved into their first home, albeit married to the same partner, Jesus. Even if it is 11 and eight years respectively since they first said Yes, the analogy is not specious.

Speaking about the moment in 2005 when she finally fell for Jesus, Sr Monica said she felt it was “like knowing the right man to marry.You just knew.” She was on a visit to the Sisters convent in New York. It was, she said, “the greatest gift of my life.”

For Sr Jacinta (39), who is from Northampton and whose mother is Irish, it happened in Rome in 2000. “I suddenly realised Jesus was interested in me personally. It deeply, deeply changed my heart. I was 26 . . . I was overwhelmed by this amazing joy you couldn’t manufacture. It was a feeling of almost like falling in love, which you cannot control.”

‘Something was missing’
Sr Monica (45), is from Long Island, New York. Her ancestors are from Monaghan and Armagh.. She was an investment manager in Boston. She “had it all” but “knew something was missing.” She found that “something” on a trip to Medjugorje.

Both sisters were attracted to the Franciscan Sisters of Renewal by the new congregations ’s commitment to prayer and to the poor. It was founded in New York in 1988.

For now, in Drogheda, the Sisters are feeling their way. God has a plan and it will unfold, they believe.

“We are trusting in God to make it clear,” said Sr Jacinta.