C of I bishop backs civil marriage for same-sex couples 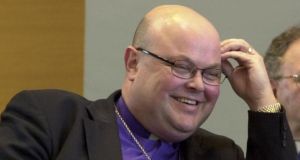 A file photograph of Church of Ireland Bishop of Cork Paul Colton, who has said that he supports the introduction of civil marriage for same-sex couples.

A Church of Ireland bishop has publicly supported calls for the introduction of civil marriage for same-sex couples.

The Bishop of Cork Paul Colton said today he hoped the church would one day recognise same-sex marriages in religious ceremonies.

Bishop Colton added that “having said that I’m also among those in the Church, and perhaps we’re only a minority, albeit a significant one, that long to see the day when we can have a discussion - as we’ve had discussions over the years on all sorts of other issues about the nature of marriage - with a view, ultimately, at least to the blessing of same sex couples following civil unions if not to their marriage in church as is happening in other parts of the Anglican Communion.”

Speaking in Cork last Monday, at the launch of LGBT Awareness Week, Bishop Colton said he was “deeply conscious of how generously gracious and open your invitation to me, a Church leader, is in including me today as your guest of honour. Not gracious in the sense of courteous and kind, but more in the religious sense of grace – your invitation to me is undeserved; it is an unmerited favour.”

Its chairman Dr Richard O’Leary said today: “The bishop’s acknowledgement of the hurt that the church has inflicted on its gay and lesbian members is greatly appreciated especially as it comes on the day we are holding services to mark the International Day Against Homophobia and Transphobia”.