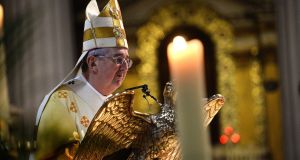 The Archbishop of Dublin, Diarmuid Martin, “vilified” members of the clergy who were criticised by the Commission of Investigation into the handling of child abuse allegations by the Dublin archdiocese, a leading priest has said.

The criticism by Fr Tony Flannery comes just days after a bishop and a priest defended the reputation of Auxiliary Bishop Dermot O’Mahony – a figure who was severely criticised by the inquiry – at his funeral.

Saying that the commission had “serious faults”, Fr Flannery, the co-founder of the Association of Catholic Priests, wrote on his website: “I never met, nor had I any dealing with, Bishop Dermot O’Mahony.

“Until the Murphy Report, anything I ever heard about him was positive – a warm, gentle, caring man who was a shining light in a Church that could often be harsh and judgmental,” he wrote.

The commission, led by Ms Justice Yvonne Murphy, inquired into the handling of clerical child sex abuse allegations in Dublin’s Catholic Archdiocese between 1975 and 2004. Its report was published in November 2009.

According to Fr Flannery, “the only reason [the commission] worked so smoothly and efficiently in the case of the Dublin diocese was that the bishops and senior clergy made no effort to assert their rights to natural justice.

“I know they did this so that no more pain would be caused to those who had suffered at the hands of priests, but they got no acknowledgement for this; indeed they were vilified from all sides, including by the Archbishop of Dublin,” he wrote.

The decision of Bishop Walsh to publicly defend the late Bishop O’Mahony was welcomed by Fr Flannery.

“I was also glad to see what Bishop Eamon Walsh said about their being a serious lack of equity in the way Dermot was treated.”