‘I’ve become someone, from nowhere, through people with big hearts’ 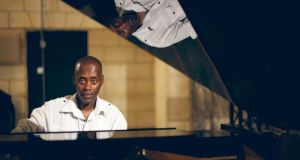 Ethiopian pianist and composer Girma Yifrashewa: he says his recital at Farmleigh in Dublin on Wednesday evening will be “very, very special” for him, “very spiritual”.

This is the story of an internationally acclaimed classical pianist from Africa whose career was made possible by the timely intervention of the Irish Christian Brothers in Rome. It is such stuff as films are made of.

Girma Yifrashewa – for it is he – will visit Ireland, home of his benefactors, for the first time next week. Yifrashewa was born in Addis Ababa, capital of Ethiopia, in 1967 and saw his first piano at 16. That was at the Yared School of Music in Addis Ababa, where his musical talent had brought him. He played the kirar then, a harp-like traditional Ethiopian instrument.

After an introductory phase, Yifrashewa chose the piano, which he studied for four years before winning a scholarship to Bulgaria’s Conservatory of Music in Sofia. It was a five-year programme which came to an abrupt end in his second year with the fall of the communist regime in 1989.

Everything collapsed in Sofia and Yifrashewa himself was destitute. Through the Ethiopian diplomatic community, he raised the train fare to travel to Rome where he arrived at the central train station Termini “with not a penny”.

There were “a lot of Ethiopians there” who helped him out in those first days and a Dutch nun called Sr Pauline who helped him find accommodation. She was “very, very surprised” to find that he wanted to return to Sofia. “Bulgaria, she used to say, was not in a good condition,” Yifrashewa says. She knew the Irish Christian Brothers in Via della Maddalena had a piano and arranged for him to practise there.

“It was the beginning of change in my life,” he says. He was offered a place to stay and “was accepted as part of the family. I played [piano] all day.”

The brothers also couldn’t believe that he wanted to return to Bulgaria, pointing out the news on television to him. Yifrashewa took part in a Christmas concert and made a big impression. The Christian Brothers then sent him back to Sofia in 1991, funding all his expenses. He remembers the late Brother Austin Connolly as one of his main benefactors. “He had a great love of my talent and treated me just like a parent would.” He was “from Dublin, with relatives in Kilkenny”.

In 1994 Yifrashewa graduated with a master’s in piano from Bulgaria’s music conservatory. He returned to the Christian Brothers in Rome and gave his first public concerts there. However, he wanted to return home as he hadn’t seen his family in seven years and planned to base himself in Addis Ababa.

One day Br Connolly said he wanted Yifrashewa to come to the centre of Rome as he had to buy a piano for a relative and needed advice. They could not decide which piano to pick. Then Br Connolly said: “Select whatever you like. It’s for you.” Yifrashewa says he became “very, very emotional”. The shop-owner recommended a Petrof piano for the classically trained, which was then shipped to Addis Ababa. “It arrived before me,” he says.

He returned to Ethiopia in 1995 where he performed at the Italian institute in Addis Ababa, the first Ethiopian to perform as a soloist. It was the beginning of his professional career. Since then, his performances have been acclaimed throughout Africa as well as in Europe, Australia and the US.

The Irish Christian Brothers continued to support him financially in those early years and he could not have survived without them. “They rescued me and did all they could to change my life. I’ve become someone, from nowhere, through people with big hearts.”

His recital at Farmleigh in Dublin on Wednesday evening will be “very, very special” for him, “very spiritual.” His dream is to meet Irish Christian Brothers there. Hosted by Minister of State Seán Sherlock and supported by Ethiopian Airlines, the recital also marks yesterday’s first direct scheduled flight from Ireland to Africa, when Ethiopian Airlines flew from Dublin to Addis Ababa.