Rates of LGBT self harm, suicide are horrific, says McAleese 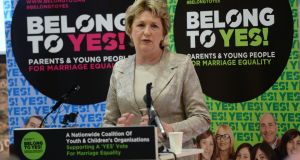 Former president of Ireland Mary McAleese has described the findings of a new report which reveals high rates of suicide and self-harm among gay teens as “horrific”.

While Ireland revealed itself to be a country committed to equal rights in last year’s same-sex marriage referendum, she said it was clear that the “long-standing architecture of homophobia” will take years to dismantle.

Speaking at the launch of the of the report, she said: “This scholarly report is as essential and revealing as it is horrifying. The ongoing damage is undeniable. That it involves so many young people is tragic. That it is solvable is the good news,” she said

“In May 2015 the Irish people convincingly showed their commitment to levelling the playing field for our LGBTI citizens. I know when they read this report they will be heart sore and determined that their homes, streets and schools will not be party to continuing the embedded culture which supports this level of misery.”

She added; “They will want to see a very different story when this research is repeated in a few years time. . . We have the chance to make this country the best in the world for LGBTI citizens.

“It will not happen by chance but by change. We committed to that change last May and now we have to follow through, drilling down through the centuries ofsediment, to the heart’s core, releasing the goodness, decency and egalitarian sensibility that Ireland is capable of.

“The children who are in cots and buggies today, who will discover their sexual identity in twelve or so years time have the right, to grow into mentally healthy and well-adjusted teenagers. What we do now can help ensure that no bully and no homophobic, biphobic or transphobic culture will too easily deprive them of that right”.

The study notes that Ireland has made significant strides in advancing the civil rights of the LGBT community, while the majority of over-25s report good self-esteem and are proud of their identity.

But significant numbers of younger LGBT people experience elevated levels of suicidal behaviour and self-harm, as well as worrying levels of severe and extremely severe stress, anxiety and depression.

The study, commissioned by campaign groups Glen and Belong To and funded by the HSE, is based on an online survey of more than 2,200 lesbian, gay, bisexubal, transgender people in Ireland, with a special emphasis on young people.

It also includes a telephone survey of a nationally representative sample of more than 1,000 people aged 18 to 65.

Some 56 per cent of LGBT teens aged 14-18 in the study said they had self-harmed while 70 per cent of this age group had seriously thought of ending their own life.

The study is the first to include intersex people, those born with sex characteristics that do not allow them to be defined as distinctly male or female.

Overall, the report finds school continues to be a very difficult place for many young LGBT people. Only one-in-five feel they belong completely in their school, while less than half feel they have received positive affirmation of their identity.

The report also shows that LGBT people continue to experience victimisation and harassment in their day-to-day lives. Three-quarters have been verbally abused, with almost one-third reporting abuse in the past year.

Only one-in-three felt safe showing affection or holding hands with a partner in public. Some 15 per cent said they would never do either.

One-in-three have been threatened with physical violence due to their sexual identity, while one-in-five had hurtful things written about them on social media.