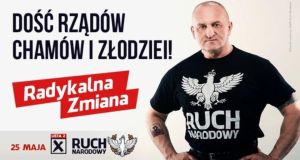 Promotional material for Marian Kowalski, a candidate in next month’s Polish presidential election.

A group of up to 60 anti-racist and anti-fascist protesters gathered outside Jury’s hotel on Ormond Quay on Friday night at about 9pm where it is understood a Polish far-right event took place.

There were reports of scuffles outside the hotel, but a Garda spokeswoman said there were no arrests and no incidents to report.

A protest had been mounted earlier at the Academy Plaza hotel off O’Connell Street where the same event had been due to take place.

Marian Kowalski, a candidate in next month’s Polish presidential election, was due to speak at the Academy Plaza hotel off O’Connell Street.

The group hosting the event, a far-right Polish political movement, Ruch Narodowy, cancelled the event on Thursday, a spokesman for the hotel said.

“They cancelled themselves, saying they were moving to another venue.”

Mr Kowalski, Presidential candidate for Ruch Narodowy (The National Movement) in elections taking place in Poland 10th May, was due to address Poles living in Ireland, at the hotel.

He was also due to address members of the Polish community in Cork on Sunday but the Ambassador Hotel there has cancelled the group’s booking.

A crowd of between 40-50 protesters had gathered outside the Academy Plaza hotel in Dublin on Friday evening.

Poles living here have a vote in the election and Ruch Narodowy has members across the State with a branch in Cork.

Among those organising the protest was Shane O’Curry, director of the European Network Against Racism (Ireland), who said beforehand that the protest would be “dignified and peaceful”. It was going ahead as it was necessary to stand “in solidarity with the vast majority of Polish people in Ireland who do not share this organisation’s’s views”.

He said when one examined “their website, their literature, their insignia, their language” one could see “they are neo-Nazi. These are the real deal,” he said.

Ruch Narodowy is an umbrella group made up primarily of two far-right organisations – the ONR (National Radical Camp) and MW (Common Polish Youth). They dress in black uniforms and photographs show them giving fascist salutes and marching carrying neo-Nazi flags and banners.

Though both meetings scheduled for this weekend have been cancelled there are rumours the events have been moved to alternative venues in Dublin and Cork.

Among those who had contacted the Ambassador hotel in Cork was Sinn Féin deputy, Jonathan O’Brien.

“I emailed the manager on Wednesday just outlining my concerns and giving a bit of background on the group, the basics of their politics and told her my view of the need to challenge this ideology. The manager called me back on Thursday to say they had decided not to host the event,” said Mr O’Brien.

“I am all for freedom of speech but that comes with responsibilities and in my opinion the views expressed by this group have no place in a modern society. I’m not saying they don’t have a right to have these views or even to express these views but these views are dangerous and have to be challenged.”

A spokeswoman for the Academy Hotel in Dublin confirmed the event had been cancelled, as did a spokesman for the Ambassador hotel in Cork. Neither would comment further.

A Jury’s Hotel spokesman was contacted for comment on the event at the hotel.