‘Are we to be limited in our actions by the narrow self interest of the present?’ 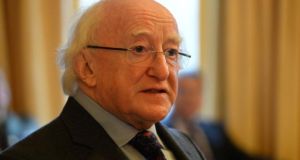 President Michael D Higgins has called on European leaders to make the case to their electorates for the protection of asylum seekers as the global migration crisis worsens.

President Michael D Higgins has called on European leaders to make the case to their electorates for the protection of asylum seekers as the global migration crisis worsens.

He said national governments needed domestic refugee systems that were “fair, equitable and efficient” and welcomed the recent publication of the report on direct provision when he addressed leading humanitarian activists at the Irish Humanitarian Summit 2015 in UCD.

Mr Higgins said the international response to the crisis to date had been “wholly inadequate”.

He called for political and moral leadership that was courageous and far-sighted to address the “unprecedented” situation.

“This is a moment for leadership that is courageous, grounded in an unqualified commitment to human rights, and informed by a long-sighted understanding of the gravity of the present situation.

“This is a moment for European leaders to engage in the public space with their parliaments and with their electorates and, rather than yielding to new populisms, to make the case for solidarity and protection.

“Are we to be limited in our actions by the narrow self interest of the present, or are we to fulfil the duties bestowed on us by the principles of universal human rights, by our debt to history, and by our obligations to the future?”

Italy, Malta and Greece could not be abandoned or expected to fulfil Europe’s duties on their own simply by virtue of geography, he said.

Respect for the rights of migrants and refugees should not be “diluted by the rhetoric of prejudice and fear”.

Mr Higgins said Ireland’s experience of famine and emigration had influenced its foreign policy. Ireland should advocate with global partners to help ease the ongoing humanitarian crisis, he said.

For all European nations, the memory of the refugee experience should be within the reach of one or two generations, he added.

“Let us first be unequivocal that this present crisis of displacement is not an issue that can be compartmentalised in a silo that we might simply label security, or externalised as simply a regional concern for some.”

Both responses would be morally inadequate, he added. “It is a global issue which is directly and primarily concerned with the protection of human rights.”

He called for a fresh commitment to the universality of human rights and to the common humanity of all.

“The alternative is to choose short-term and short-sighted responses based on a narrow sense of national self-interest - a choice that would be, for humanity in general and our shared future, little short of disastrous.”

He said the number of refugees and displaced persons was now at its highest level since figures were first recorded in the 1950s.

He said Europe had seen great humanitarian challenges in the Mediterranean, where this year almost 2,000 people had died. He compared the boats they travelled in to those boarded by Irish famine victims.

The scale of drowning witnessed in the first months of this year demanded emergency action, he added. He praised the contribution of Ireland’s LÉ Eithne.