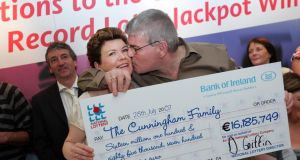 Paul and Helen Cunningham, from Fairhill, Cork City, who collected the cheque for a Record Lotto Jackpot Prize of over €16 million, at the National Lottery Offices, in Dublin, in 2007. Photograph: Eric Luke/The Irish Times

A consortium comprising Ontario Teachers Pension Plan (the owner of the Camelot Group), An Post and An Post pension funds, has been selected as the preferred bidder for the next National Lottery licence which will be in place for a 20 year period.

In a statement issued this evening, Minister for Public Expenditure and Reform Brendan Howlin announced that the consortium, Premier Lotteries Ireland, met the “essential requirements” and had submitted the highest licence fee proposal which is €405 million.

Premier Lotteries Ireland has been established as an Irish incorporated company to bid for and operate the lottery.

“Discussions on finalising the terms of the licence will commence shortly between the Department of Public Expenditure & Reform and the Preferred Applicant,” Mr Howlin said.

The discussions are due to be completed in November with a formal signature date in December.

Subject to successful finalisation of the licence, it is envisaged that the new licence will become effective from October 2014.

The new licence will see an ongoing annual contribution to good causes set at 65 per cent of revenue, which is defined as sales minus prizes.

The statement said issues relating to the terms and conditions of lottery staff are being addressed “in a positive way” in proposals from the Labour Relations Commission.

The licence fee will be payable in two equal installments, the first on signature of the licence in December and the second on commencement of the licence scheduled for October 2014.