Pontiff celebrates Mass with call for ‘tenderness’ in Christmas sermon 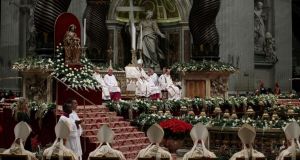 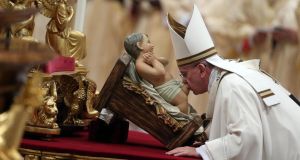 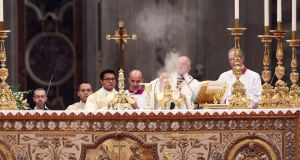 Pope Francis celebrated Christmas Eve with a late-night Mass in St Peter’s Basilica and a phone call to some Iraqi refugees forced to flee their homes by Muslim militants.

Francis told refugees at the tent camp in Ankawa, a suburb of Irbil in northern Iraq, that they were like Jesus, forced to flee because there was no place for them.

“You’re like Jesus on this night, and I bless you and am close to you,” Francis said. “I embrace you all and wish for you a holy Christmas.”

The Ankawa camp houses mostly Christian refugees forced to flee the onslaught by militants of the Islamic State. In a letter to Middle East Christians penned earlier this week, Francis urged them to remain in the region, where Christian communities have existed for 2,000 years, and to help their fellow Muslim citizens present “a more authentic image of Islam” as a religion of peace.

Pope Francis ushered urged the world’s Catholics to allow God to enter their lives to help combat darkness and corruption.

Christmas Eve Mass was celebrated in front of thousands of people in St Peter‘s Basilica. It is the second Christmas season for the pope, who was elected last year as the first non-European pontiff in 1,300 years.

He has brought an air of simplicity to the Vatican, refusing many of the trappings of office, and has made plain his determination to reform the Vatican and bring the Church‘s hierarchy closer to rank-and-file Catholics.

In his homily, Francis, wearing white vestments, said Christmas is a time to remember that God‘s message of peace “is stronger than darkness and corruption“

“The question put to us simply by the infant‘s presence is, ‘Do I allow God to love me?‘“ he said. “Do we have the courage to welcome with tenderness the difficulties and problems of those who are near to us ...?“

“How much the world needs tenderness today!“ he said.

Later this morning, the pope will deliver his traditional Christmas Day “Urbi et Orbi“ (to the city and the world) blessing and message from the central balcony of St Peter‘s Square to tens of thousands of people.

The phone call of Christmas greetings and the night-time Mass kicked off a busy few weeks for the 78-year-old pontiff that includes his traditional Christmas day speech, New Year’s Eve vespers, and 2015 greetings a few hours later.

On January 6th he will celebrate Epiphany Mass, and on January 11 he will baptise babies in the Sistine Chapel. A day later he gives his annual foreign policy address to diplomats before boarding a plane for a week-long trip to Sri Lanka and the Philippines.

The Mass comes just days after Francis excoriated the Vatican bureaucracy for a laundry list of sins, including lusting for power and suffering from “spiritual Alzheimer’s”.

Many of the same cardinals, bishops and priests who received the dressing down were to be on hand in St Peter’s Basilica for the Mass. Several have spoken out in recent days saying Francis was merely asking them to examine their consciences, as any Jesuit spiritual director would do, and to use the Christmas season to heal.