Charity’s staff, including 60 counsellors, expected to be made redundant on Friday 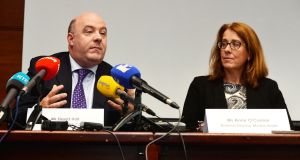 Suicide prevention charity Pieta House is to take over the services which were offered by the embattled charity Console, it was confirmed yesterday.

Staff are expected to be made redundant today while Pieta House management will meet counsellors who were contracted to Console to assess the possible continuation of their services.

“It will be in everyone’s interests to try to maintain those relationships if at all possible,” Anne O’Connor, HSE national director of mental health, said at a joint press conference in Dublin.

The continuation of services which were provided by Console has been to the fore of ongoing crisis-management efforts.

The charity employed 12 full-time staff and 60 counsellors. Its operations included one-to-one therapy for 314 people and it fielded about 6,000 requests for help every year, including an average of 29 helpline calls every day.

“This was not a charity shop that could just be closed. This had live people being counselled and being prevented from suicidal tendencies,” said Console interim chief executive David Hall. “This was about a safe pair of hands in a timely manner.”

As well as ensuring a safe continuity of support structures – the HSE was careful to point out the move was not a “transfer” of services – the deal brokered with Pieta and approved by the High Court also dealt with potential data protection issues.

There are currently seven investigations into Console since financial governance and other issues at the charity came to light in a Prime Time programme last month.

“The Office of Corporate Enforcement [has] a criminal prosecution ongoing currently and obviously want to seize the files belonging to Console,” Mr Hall said. “And therefore we had to ensure, and all parties had to be engaged in a proactive discussion over the last four or five days, to ensure that patient confidentiality is paramount. That has now been secured. An order has been given by the High Court to ensure that happens.”

Sensitive case file information would now be vetted by the HSE before any information was released to investigators, he said.

Staff at Console have received 89 per cent of money owed to them over the past three weeks, although a total of €74,500 remains outstanding from before the documentary was aired.

Creditors bills amount to just under €300,000. Mr Hall said suppliers had been “very reasonable”, particularly Eir in respect of the charity’s phone line. Efforts will now be made to reach agreements on rental conditions with landlords of various properties where Console’s services were provided.

Pieta House is engaged in suicide crisis management, while Console dealt primarily in the area of bereavement. Funding for its replacement services will now be examined.

“We are going to work now with Pieta to look at really what the cost of the service is. We want Pieta to commence providing a service that is equal to the service that was provided by Console,” Ms O’Connor said.

In a statement issued in the aftermath of yesterday’s High Court hearing, Mr Hall noted the “crisis has shattered the nation’s trust in charities”.

The controversy is due to be examined by the Public Accounts Committee (PAC) today. HSE director general Tony O’Brien will tell the committee his internal auditors had met “considerable resistance” from the charity’s then chief executive Paul Kelly when it sought to carry out its investigations last year.

He will also say an increase in funding in 2013 was predicated on the charity agreeing to a greater level of scrutiny and enhanced governance by the National Office for Suicide Prevention (NOSP).

“It was this increased level of scrutiny by NOSP that gave rise to a number of concerns, including Console’s continued failure to respond to requests for information, delivery on commitments to commission-independent reviews of its service and failure to attend significant meetings (particularly relating to the helpline) and to their annual accounts.”

People aged 15-34 now account for 40% of Covid-19 cases 07:55
Should you consider a postgrad during the pandemic? 05:01
Cabinet approves reforms to alleviate tree felling licence delays 05:00
'The day of the water cooler chat is gone' 05:00
How to identify and develop soft skills in a pandemic 05:00