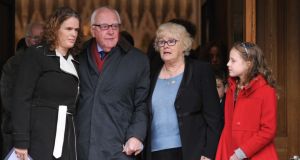 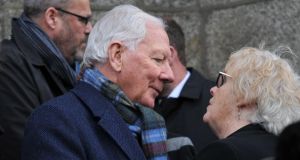 Phelim Donlon loved this time of year, his wife, Pat, recalled at the end of his funeral Mass in the Church of St John the Baptist, Blackrock, Dublin, on Tuesday.

A former drama officer at the Arts Council, Mr Donlon died at the Blackrock Hospice on Sunday.

Ms Donlon said her husband loved December “because there was always a hope that some money might be left over in other disciplines and he’d be there to mop it up”.

That was the public Phelim “who suffered as much, if not more, when any of his clients’ grant was cut”.

He was also a man, she said, who believed in women, “so that any woman who worked for him was encouraged to aim higher and go farther and all did.”

They met when she was 19 and he “dazzled me with his love of poetry and art”. He gave her “freedom when he married me” and “encouraged me and supported me in all my many mad ventures over our 49 years together”.

Recent months had been “so condensed, precious with moments of sadness and grace. We talked about his death and most of today’s service was at his behest. We laughed a lot and cried some.”

She recalled that it was a former director of the Arts Council who best summed him up when she said that Mr Donlon “was calm in the face of panic and panicked in the face of calm”.

Their daughter, Sinéad, remembered the occasion when, following an encounter with a plastic bag in the sea, her father claimed to have been attacked by a jellyfish, and the time his wallet was stolen in Paris and he said it was because he was wearing his unlucky trousers.

“He died as dramatically as he had lived,” she said, “on the stroke of midnight on Saturday night-Sunday morning.

Grandson Paddy read a brief tribute to his grandfather.

Mr Donlon’s nephew and Mass celebrant Msgr Paul Callan said he felt “a great sense of awe at all I have heard about my uncle’s past these last few days. He was an amazing man, very unassuming, very knowledgeable and very kind.”

The chief mourners at the funeral were Dr Pat Donlon, their daughters, Lorna and Sinéad, his sister, Sheilagh, and brother, Michael.

*This article was amended on December 17th