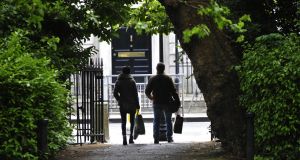 A file image of an entrance to St Stephen’s Green Park in Dublin. The Office of Public Works says enough rubbish to fill more than 20 household wheelie bins is removed from the park every morning amid criticism of alleged drug use in the city centre space. Photograph: Aidan Crawley.

Enough rubbish to fill more than 20 household wheelie bins is removed from St Stephen’s Green Park in Dublin every morning, the Office of Public Works (OPW) has said.

The OPW, which is responsible for the upkeep of the park, was responding to criticism of alleged open drug use and sightings of discarded drug paraphernalia in the city centre site.

“Unfortunately, unauthorised access outside the park’s normal opening hours is an issue,” the OPW said in a statement. “Despite the park’s historic railings, it’s difficult to secure its perimeter, which extends to 2km, from determined or desperate intruders.”

It said drug use and homelessness were two major social issues that “not only effect the day to day management of this popular park but also the city centre”.

It said that a team of OPW staff “continually clean out” all shrubberies within St Stephen’s Green Park on a daily basis, searching all areas for sharp objects and debris which are “removed immediately”.

On Monday, a trailer load (in excess of 20 green household wheelie bins) of debris including drug paraphernalia, sleeping bags, cardboard, and canisters, was removed from the park.

A spokesman for the OPW said this volume of debris was “a daily occurrence”.

A spokesman for the Peter McVerry Trust said the emphasis ought to be on the needs of the individuals engaged in drug misuse.

“There’s a lack of access to treatment and there’s a lack of funding for drug addiction services,” he said. “If we tackled the root cause of the issue, which is drug misuse, the presence of drug paraphernalia in our cities would be reduced.”

The trust’s spokesman added that it would “really welcome” the introduction of medically supervised injection centres.

“We think it is absolutely essential that we have them,” he said. “It has come to a point that we have to fundamentally reassess our approach to drug treatment and how we support people in addiction.”

The statement from the OPW said the Garda and park constables “actively patrol” the green during opening hours while a security company monitors the area during out of hours.

“Preventative measures such as the pruning of shrubberies are regularly undertaken as well as ongoing discussions with the gardaí,” added the statement. “Unfortunately, this is a city wide problem.”

The OPW spokesman confirmed that individuals discovered in the park after hours are “moved on”.

Responding to reports on the matter, Lord Mayor of Dublin Brendan Carr called for the immediate opening of supervised injection centres.

“As long as people are injecting in bushes and laneways, we are going to have scenes like this,” he said.

“If we establish supervised clinics, we will have a huge input into stopping this kind of behaviour. There will also be no transmission of diseases.”