Olivia O’Leary on depression: ‘It’s still hard to talk about’

‘It was that feeling of not being able to raise a hand to get to the phone,’ says broadcaster 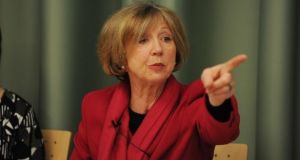 ‘It’s still skating on thin ice because I never want to go back there again, and I guard against it’. Photograph: Aidan Crawley

Olivia O’Leary has spoken about her heavy drinking and feelings of helplessness in her 20s after revealing her struggles with depression on Tuesday.

Speaking on the Seán O’Rourke Show following her column on RTÉ Drivetime about her own previous struggles with mental health, the former Newsnight presenter said she has not had any relapses over subsequent decades but she knows “that it could happen again”.

She also paid tribute to Fianna Fáil TD Robert Troy for a candid speech he made to the Dáil about his own personal difficulties following the Government’s attempts to remove €12 million from the mental health budget. She said this helped encourage her to come forward and speak about her own experiences.

“It’s still hard to talk about. It’s still skating on thin ice because I never want to go back there again, and I guard against it. It was that feeling of not being able to raise a hand to get to the phone. It was that feeling of lying there doing nothing because you couldn’t think of any way of getting out of it,” she said of her episode of depression at the age of 24.

If you just missed Olivia O'Leary's column, you can listen back here https://t.co/uMLNffMEfo

She recovered after a period of psychotherapy and medication, as well as making some lifestyle changes.

Ms O’Leary spoke about the pressures she faced as a young woman on the cutting edge of current affairs in a male-dominated RTÉ newsroom at the time. This also brought with it a life of heavy drinking in her early 20s which she felt played a part in subsequent struggles.

“I think when you’re drinking heavily, and I was drinking gin and tonic at the time, over a period of years. . . I have no doubt that has an effect.”

Ms O’Leary went on talk about a lack of service provision for young people who are currently facing mental health difficulties, and pleaded with authorities to develop “a proper constituency of support” for such issues.

“When I think of those people and how lonely and lost they must feel, and how helpless their families must feel, that’s when you have to say ‘let’s talk about this, let’s develop a proper constituency of support for this’ so that politicians and governments can’t ignore it anymore, so they can’t go stealing from the mental health budget,” she said.