Noonan and Sutherland clashed over wording of 1983 abortion referendum 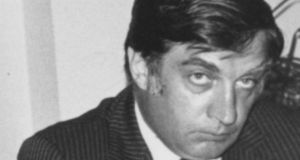 Tensions between the then minister for justice Michael Noonan and attorney general Peter Sutherland over how to meet Fine Gael’s commitment to holding an anti-abortion referendum in 1983 are revealed in the latest batch of declassified State papers.

In a letter marked “private and confidential” dated February 28th, 1983, Mr Sutherland complained to Mr Noonan about the minister’s attempts to draft a revised wording that might satisfy the demands of the anti-abortion lobby without consulting the attorney general’s office. Mr Sutherland also pointedly suggested the minister spend his energies instead trying to persuade different interest groups to accept the attorney general’s wording.

Mr Sutherland had proposed “the confirmative proposal” – an amendment giving constitutional protection for a legislative ban on abortion without affirming the right to life of the unborn. Mr Noonan doubted whether this would be accepted politically, with the Pro-Life Amendment Campaign holding sway over public opinion.

Medical intervention
Mr Noonan’s officials drafted a wording that recognised the right to life of the unborn but also specified that medical or surgical intervention would be allowed to save the life of an expectant mother. This proposal went some way towards satisfying Fine Gael’s pre-election pledge to support the draft amendment published by the Fianna Fáil government.

Commenting on Mr Noonan’s initiative, however, Mr Sutherland said: “I am disappointed that there was an apparent lack of communication between our respective offices during the last couple of weeks. If, as would appear to be the case, your advisers were working on the amendment, unnecessary duplication might have been avoided had a greater degree of contact been maintained. Frankly it mystifies me as to why there should have been difficulties of this kind.”

The attorney general, who had been attracting some internal criticism in the government for his perceived inflexibility on the issue, told Mr Noonan: “Your view that the confirmative proposal stands no hope of being accepted (which I do not accept) is certainly true if no steps are taken to positively promote it (but the same could be said to a greater or lesser extent of any other alternatives).”

Church groups
Recommending that Mr Noonan seek to build support for the attorney general’s wording among church groups and Fine Gael deputies, Mr Sutherland added: “I would also like to make the point that taking what might appear to be a soft option now, through the utilisation of a formula which takes away some but not all of the infirmaties [sic] of the [Fianna Fáil] draft amendment, will result in a negative response from all quarters.”

Tensions
Tensions continued in subsequent days with MrNoonan suggesting t the government might be as well not hold a referendum as put Mr Sutherland’s wording to the people. “The Minister does not consider that the proposal put by the Attorney General is one that either has to be accepted or ought to be accepted,” a department memo dated March 2nd said.

It added that it seemed to MrNoonan “that it would be a very difficult task to convince the public that there are insurmountable difficulties” in providing a right to life of an unborn child in the constitution with certain qualifications.