Last time Dublin City Council got into bed with private developers, it was a disaster 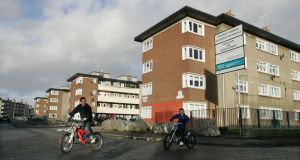 The 2008 collapse of the Public Private Partnership (PPP) schemes resulted in the disbanding of communities and left the city scarred by derelict blocks of empty flats vacated for regeneration projects that never happened. File photograph: Cyril Byrne/The Irish Times

It is exactly a year since Dublin City Council’s head of housing, Dick Brady, tentatively put forward the idea that the council might seek private-sector expressions of interest in building homes on council-owned land.

Brady may as well have asked councillors if they were up for building another incinerator on the Poolbeg peninsula.

To say the elected members weren’t keen is an understatement. But their reluctance was understandable.

The last time the council got into bed with private developers, the relationship was a disaster. Memories are still raw.

The 2008 collapse of the Public Private Partnership (PPP) schemes resulted in the disbanding of communities and left the city scarred by derelict blocks of empty flats vacated for regeneration projects that never happened.

Brady was quick to reassure councillors that, this time, things would be different.

For starters, none of the sites proposed were existing housing schemes, so no tenants would be displaced to allow development to go ahead.

The proposed model was also different. In the old PPP arrangement, the council supplied the land and a developer built social and private housing, using the sale of the private properties to offset the cost of the council housing.

These schemes relied on the sale of private housing to fund the construction of social housing. Under the new model, most of the housing would remain in the rental market. Unlike traditional council estates, there would be a mix of social and private tenants.

As well, unlike developers who planned to stick around long enough to sell the houses and apartments, and who scarpered when property prices collapsed, the new private partners would be expected to stay for the long haul, with an involvement in the long-term management of estates.

Finally, Brady stressed, this was just a testing-the-water exercise and no council land would be developed without the sanction of councillors.

Realistically, there is no way the council can build 1,500 homes without the involvement of the private sector.

1 Children found dead in their Dublin home were murdered
2 The real Contagion virus is out there and it’s causing virologists to worry
3 Young homeless mother may have been dead in tent for a number of days
4 Cork shootings: Gardaí believe older son was shot multiple times
5 Aldi, Lidl bow to pressure to ban non-essential ‘middle aisle’ sales
Real news has value SUBSCRIBE