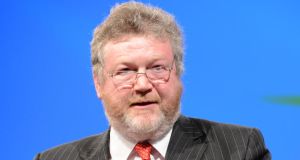 Minister for Children James Reilly has been urged to address the lack of social workers in the State. Photograph: Eric Luke/The Irish Times.

Minister for Children James Reilly has been urged to address the lack of social workers in the State.

The Irish Times today reported that more than 9,000 cases of abuse, neglect or welfare concerns over children at risk are waiting to be allocated a social worker.

The number of reports of children at risk received by social services has increased by 98 per cent over the last seven years to 41,600 in 2013 .

Fianna Fáil spokesperson on mental health, disabilities and special needs Colm Keaveney TD said Dr Reilly must “get a grip on the ongoing crisis in the availability of social workers.”

A breakdown of new figures provided by the Child and Family Agency – the State agency responsible for the sector – shows there were some 3,250 “high-priority” cases over the summer waiting for a response.

Earlier this week, the Ombudsman for Children Emily Logan expressed concern that “safe social work” was not possible in parts of the State.

“The lack of social workers to deal with instances of abuse or neglect in Ireland is a recurring issue and it needs to be addressed. The fact that the number of cases awaiting the allocation of a social worker is heading for 10,000 is deeply disturbing,” he said.

Mr Keaveney said a lack of social workers is leaving children in vulnerable situations and putting them at greater risk.

“Social workers are extremely worried about the welfare of the children that are already in the service or have been newly referred to it. This stems from the fact that the number of referrals in relation to suspected child abuse have increased steadily over recent years,” he said.

The Irish Foster Care Association (IFCA) said it was concerned over the increased number of referrals to child protection services and the lack of social workers to carry out appropriate assessments.

Head of Services at the IFCA Breda O’Donavan said the lack of social workers also impacts on the services and supports provided to foster carers and the children already in their care.

“Unless the Child and Family Agency is fully resourced to ensure that all child protection and fostering teams have the full complement of social workers and support staff required, these children and young people will not receive the services which they are entitled to,” she said.

Sinn Féin spokesperson on children Caoimhghín Ó Caoláin called on the Government to “fulfil its promise to children” by ensuring that sufficient social workers are in place.

“At the time of the Children’s Referendum we said that to have practical meaning it must be followed by resources from Government to protect and support children,” he said.

“The figures from the Child and Family Agency showing the major shortfall in the numbers of social workers for children represent a failure on the part of Government to fulfil its commitment. The Agency should now lead a concerted effort to ensure that the new Minister for Children James Reilly and his cabinet colleagues put this right and provide resources to put in place sufficient social workers.”